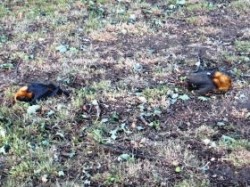 The flying fox issue remains active in the local news. One resident who lives near the main colony has kept a log of their comings and goings for the last 20 years. She stated that most of the colony “depart after the first frost and are completely gone by the second frost. The winter of 2014 was the first year that the colony remained.”

It is not clear whether it was the moderate winter or the supply of food (they are primarily nectar feeders) that was the vital factor in the colony wintering over. If it is the former then the gradually warming climate indicates that the colony may eventually become a permanent rather than a seasonal one.

Our source is one of the unlucky landholders on Riverine Street who would like to sell but has been unable to do so because the presence of the flying foxes has severely depressed the property market. However the removal of 10% of the trees they inhabit – about to be carried out by the East Gippsland Shire – may not be a solution if the bats merely relocate further down the river and closer to the CBD.

If the winter presence of the flying foxes is not another indicator of climate change then their (and our) vulnerability to heatwaves almost certainly is. The summer of 2013 saw a number of bat fatalities in the Bairnsdale colony during a brief heatwave where temperatures reached 42 C.(see photo). It appears the flying fox is extremely vulnerable to prolonged heatwaves and 42-3C appears to be the critical temperature threshold. Of recent years there have been substantial heatwave fatalities in SE Brisbane, Casino, NSW and other places where fatalities of five to fifty thousand have been estimated.

Whilst we wrangle over minor issues like relocation the main issue of climate change is all but ignored. And the current heatwave in India reminds us as a species how vulnerable we are.