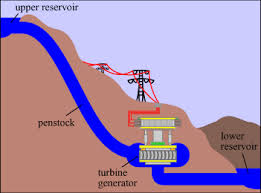 The world is edging toward the point where electricity supply will be 100 % from renewable energy technologies. Indeed, if we are to survive the existential threat of global warming, the entire world must generate all its energy this way. Australia has a long way to go. At present we get about 12% of our electricity from renewable energy, countries like N.Z. and Scotland will be near enough to 100% renewable by 2020.

The main drawback of renewable energy is the variability of supply. To get to the essential stage where we can claim that our electricity supply is absolutely 100% fossil fuel free, we have to incorporate storage options. Increasingly various battery options are becoming viable. For example, the Tesla Powerwall. In Germany, Mega-Watt scale battery storages are being trialled in order to help stabilise the grid. Large scale solar thermal power stations operate in Spain and at Ivenpah in the USA and store heat as molten salt.

However worldwide, the most common method of balancing the grid supply is using pumped hydro. This is where water is released into hydro turbines in periods of high demand, from an upper dam and then captured in a lower dam. The water is pumped back uphill to the upper dam, when the spot price of the grid electricity is cheaper due to lower demand. Instead of storing electrons in batteries, the energy is stored as water at height i.e. Gravitational Potential Energy. Pumped hydro has been deployed in the Snowy Mountains for decades and recently ARENA has given a $4 million grant for a feasibility study of a pumped hydro scheme at a disused gold mine near Townsville.

The Hazelwood brown coal power station in the Latrobe Valley, the required cooling is provided by water from the Hazelwood Pondage.  This is 840 ha of water of an average depth of at least a metre. This could be the upper dam of a pumped hydro scheme after the power station closes in the near future. The lower dam could of course be scooped out of the existing Morwell open cut, which lies about 100 m lower than the Pondage. The Melbourne Energy Institute has estimated that a 1000 MW system could be built.  This is 1000 MW of instantly dispatchable electricity, available at the flick of a switch.

This project has other advantages: It makes use of what would otherwise by useless wasteland of the old open cut, the switchyards and other infrastructure are already in place, it would draw tourists, the lower dam would not take up even 1 % of the open cur, leaving the rest for beautification, it would still keep some wealth in the area long term, after the coal fired power stations close, it would go a long way to making a totally renewable energy grid reliable.

The north facing sides of the open cut, could even be covered in solar panels producing even more renewable energy for the grid and fully account for the pumping of the water uphill. This sort of scheme ticks all the boxes for the decentralised, renewable energy grid of the future, where the network is there to top up the existing small-scale generation spread around the state. For more information read the following link from the Melbourne Energy Institute below.