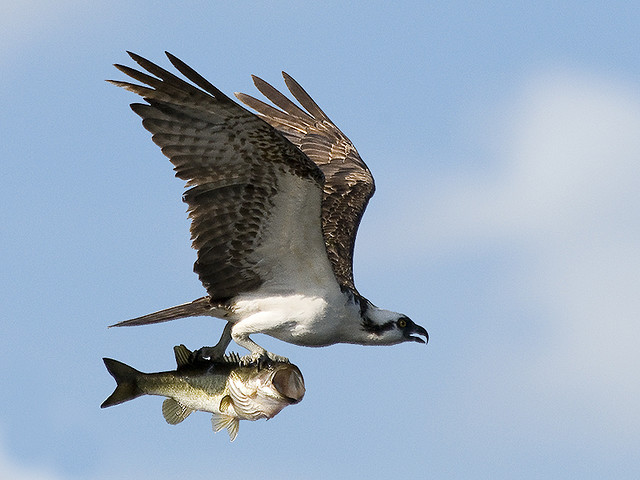 I have written previously of the growing list of new species occupying or visiting our shores and seas. Most, if not all, have arrived (at least partially) because of global warming. They include a, as yet unidentified, jellyfish being found in the Gippsland Lakes, new bird species appearing in Gippsland, and the likelihood of the Black Marlin visiting our ocean reaches. As on land the ocean and lakes temperatures are also rising allowing previously rare or unsighted species to now appear. We tend to forget that the waters around us are also warming, sometimes at a much faster rate than the temperatures on land and it is clear that Gippsland waters are warming far faster than the land mass.

Commenting on this a Gippsland Environment Group spokesperson noted that the: “Osprey, up till 15 years ago, [was] a very rare sighting in Victoria, but [is] now often being recorded on the east and central coast. The reason for this is they are a true fisherman, and only take live fish off the surface. Traditionally, fish that frequent the surface did not occur in Vic, but with currents changing, and as a result so has fish species, they are often being recorded in Victorian waters. The breeding population is still based in SA (Kangaroo Is) and North of Sydney, but … non-breeding birds are coming into Vic.” He also noted the increase in “King and School Prawn. In the 60’s and 70’s, a prawn season only occurred in the Gippsland Lakes every 3-4 years, due to the fact that they do not breed here, but the young move south in the Eastern Australian Current. Now we have a prawn season every year (some years better than others) and it is worth many millions of dollars to Lakes fishers…”

Ross Scott, a passionate advocate for the Gippsland Lakes, has also identified a number of new species in the Lakes including: “CRABS…most from offshore following the increased lakes salinity; and the Queensland crab following the warmer offshore currents.  JELLY FISH.  We still do not know the name of [one of] the jellyfish found in the lakes…but it appears to be from the north.  SHARKS… we have always had Gummy shark around the entrance. But now we have Hammerhead; Thresher sharks. And the Draftboard and Leopard sharks followed the European Green Shore Crab invasion in 2008 as well as another crab eater, Stingrays.”

One wonders how long we will have to wait before our representatives at various levels of government come to grips with (or at least recognise) the huge problem of climate change, and begin to consider actions to mitigate and adapt. Two actions in Gippsland are obvious, switching from coal to renewable energy sources as quickly as possible and conserving and protecting what remains of our native forests as a carbon store.