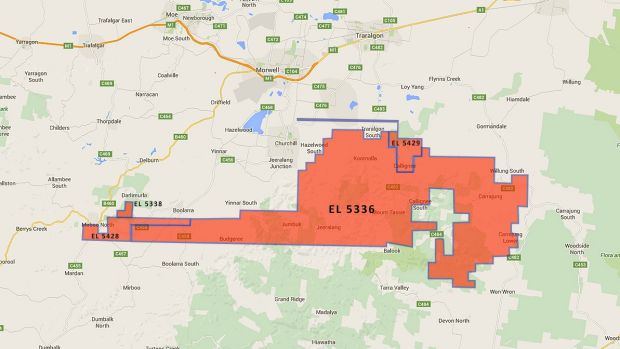 Coal and CSG Free Mirboo North, brought their 2,000 strong signature petition to ban Mantle Mining from coal exploration and mining in the Gippsland region, before the Baw Baw Shire Council on the 13th July. Mantle Mining was granted exploration licences in 2015 extending through three Shires – South Gippsland, Latrobe City and Baw Baw. Both Latrobe City Council and South Gippsland Shire Council showed their concern about these licences after the group presented Councillors with submissions and the petition.

In an astonishing revelation, Baw Baw Councillors said that they were totally unaware of these licences and had in no way been consulted. They were shocked to learn, that their valuable farmland was at risk in this way and thanked the group for their work on informing them. Councillors spoke eloquently for a motion that ensures the protection of their valuable farmland, tourism industry and environment from the risks of coal mining.

The motion was carried unanimously that Council request the Minister for Energy and Resources rescind the coal mining exploration licences within the Baw Baw Shire and that the Shire writes to the Minister to encourage increased community consultation and engagement in relation to future mining and exploration activities. Suzanne Wightman, who initially brought the petition to Council in February, said she was very pleased on the outcome and believes that, “This consolidates our position against Mantle Mining, or any other coal mining company, in that South Gippsland Shire Council have taken a strong stand against coal exploration and mining and now Baw Baw Shire going a step further in asking for the licences to be rescinded.

Latrobe City Council, (in the heartland of the coal country), is insisting on better community consultation on future coal projects. This means that it’ll be almost impossible for any coal mining company to proceed with any exploration or mining activities in these tenements. It means that our environment, land and lifestyle have greater protection from this unwanted industry.” Lorraine Bull, spoke to Council of the dangers of more coal mining and how it could only serve to exacerbate the consequences of climate change. Dan Caffrey explained how Mantle Mining’s dubious business proposal of a pumped hydro system in Hazelwood had duped investors and communities alike.

Marg Thomas warned Council of all they had to lose if this industry were to encroach into the Shire and the risk of damage to ‘Brand Gippsland’. The devaluation of land would have serious impacts on rate revenue. Beef farmer, Fergus O’Connor, informed the Councillors of the potential impact of mining on farm management and the undesirable effects on the productivity of a farming enterprise. He pointed out that mining of any kind is incompatible within our farming region. The successful motion was greeted with a resounding round of applause from the gallery.