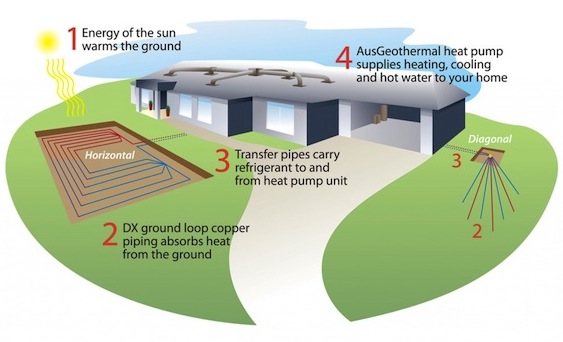 Some fellow Bairnsdale U3A students recently visited Iceland and gave a talk on their trip that featured the wonderful geothermal resource that this country utilises. I’ve previously done a blog on the potential of geothermal energy in Gippsland and utilising the geothermal energy under the brown coal was my main platform standing in Morwell in the 2010 State election. More recently whilst campaigning in the Federal election visiting the launch of Gippsland Solar’s electric car changing station I came across AusGeothermal  a local company in Traralgon.

The AusGeothermal brochure states that it “is an alternative energy company manufacturing Australian made geothermal heating and cooling products” and “geothermal is an alternative energy source that takes heat from the earth, where the temperature is a constant 15 degrees, and uses that energy to heat and cool your home or business.” The company claims up to 70% reduction in home energy costs and once the system is installed it is free. These systems would appear economically attractive to large homes and buildings, and those with significant heating or cooling components.

On a wider scale nothing much appears to have changed across Gippsland. Disappointingly, no further positive news has emerged on the possible geothermal resource below the coal. Most of Gippsland is still covered by geothermal prospecting licences which are best described as ‘inactive’. In East Gippsland Petratherm still holds the licence. This company, a ‘penny dreadful’, lingers at the bottom of the market and is obviously starved of capital.  In 2008 they noted that “preliminary economic analysis indicates that the [East Gippsland geothermal] project is capable of producing commercially viable, large scale base load, power generation.” But East Gippsland has been, and is still, well down their list of priorities. In general Petratherm has sat on their East Gippsland Exploration licence for 8 years producing nothing tangible in that time.

Whilst generating electricity using closed circuit heat exchangers should be the main priority there are many other practical applications of geothermal energy. In Iceland the first uses were bath houses and swimming pools. In Metung for many years there was a small heated pool taking water from an oil bore. Perhaps local use of geothermal can be commenced in this way utilising the resource for things like tourist attractions and growing vegetables.