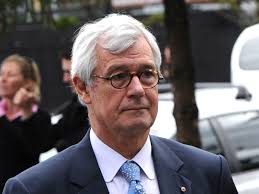 The well-known barrister and eloquent spokesman for the humane treatment of refugees Julian Burnside (above) recently stated that “If we can’t fix climate change, nothing else matters”. This simple statement sums up the political conundrum of climate change – of the climate emergency. It is compounded by the myopia and ignorance of most of our politicians and the main stream media who are yet to understand that we are in a ‘life or death’ situation. That most of what we hold dear is threatened. That climate change is already killing large numbers of people.

We are already witnessing the first effects of climate change causing mass migration from African and Middle Eastern countries into Europe. The boat people that supposedly threaten the Australian ‘way of life’ are a mere trickle compared to that which may eventually overwhelm humanity.  The cause of both the ‘Arab Spring’ and the stream of refugees from Syria has been directly related to drought, soaring food prices and conflict over scarce resources.

The flood of refugees into Europe is also just a trickle. A severe drought in any of the food bowls across the globe will again kick start mass migration. The slow, but inevitable, sea level rise is already threatening the livelihoods of large numbers of people who reside in, and farm, the river deltas of Bangladesh and Vietnam with erosion, increasing salinity of the water table and inundation. Amongst the poorer nations of the world there is probably already a substantial and unrecorded movement of people internally who have been displaced by the effects of climate change. The current Syrian crisis originated in this manner – well before the sinister intervention and meddling of the superpowers and aggressive neighbours.

Closer to home it is the health aspect of climate change that is to the fore – the recent ‘thunderstorm asthma’ in Melbourne has no doubt been influenced by climate change though to what degree we cannot yet calculate. Sadly it caused a number of fatalities and was enough to strain our emergency health system. What we do know is that there will be more rain falling in heavier rainfall events and more thunderstorms. With each degree rise in temperature the atmosphere holds 7% more moisture. There are probably many other minor health effects of our warming climate such as the hay-fever I have been experiencing this spring. And an abrupt change to hot summers days from our mild spring may again test emergency systems with bushfires.

Burnside’s statement is a plea to all of us to abandon our concentration on the trivialities of life and politics and to turn to the main game – climate change. What is needed now more than anything else is a peaceful social and political revolution to combat the climate emergency. We need to rise above personal and political loyalties and our personal daily preoccupations to mitigate, and adapt to, this huge and complex threat. The lives of our children and grandchildren, and even your own, may depend on the outcome of this struggle. Bring on the solar revolution.