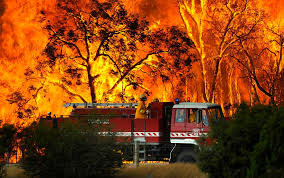 Following my pleas for the bush to be protected as a carbon store (see below) one myth repeated as a criticism was that logging reduces fire risk. Briefly the argument is that “locking up the bush” increases the fire risk and that the bush will burn down releasing more CO2 emissions. Both scientifically and anecdotally this is not so. Gippsland has always been a fire prone area and will become increasingly so with climate change. Logging as a carbon intensive activity adds to that.

In the process of ‘farming’ native forests are logged for economic timber (mainly ash and messmate) and others species are all felled in the clear felling process. These include blackwoods, wattles and other non-target species. These ‘waste’ trees, tree heads, leaves, branches, stumps and roots are all bulldozed up into windrows to be burned in the autumn when conditions are favourable. These clearfelled areas are then sown with seed from the economic species. Windrows burnt under unfavourable conditions such as in the severe to catastrophic fires of 2003, 2006/7 and 2009 literally become bombs sending up vast columns of smoke and burning embers which spread the fire well ahead of the fire front. Anecdotal accounts of fire fighters who witnessed logged coups burning during these fires verify this.

Recently Dr Chris Taylor studied the increasing fire severity in logged areas of mountain ash forest. He wrote “Our recent study, based on data from areas that burned on Black Saturday, clearly shows how extensive logging can increase the severity of bushfires in mountain ash forests. We found that the risk of “crown” fires, which burn severely and spread rapidly through the forest canopy, is greatest in mountain ash forests that have been regrowing for about 15 years. Before the 2009 fires, these young trees were established following clearfell logging.”

It follows that as our region gets warmer it will become more vulnerable to bushfires which have already threatened large parts of our region this century. Thus ceasing the logging process is made doubly important in terms of climate change – to act as a carbon store and not make global warming worse and to minimise the harm from the bushfires we will undoubtedly experience tomorrow. An essential part of the process is the protection of the forests, which if done properly, will employ far more workers than logging. The challenge then is to preserve and protect the forests as best possible as a carbon store, especially from severe bushfires.