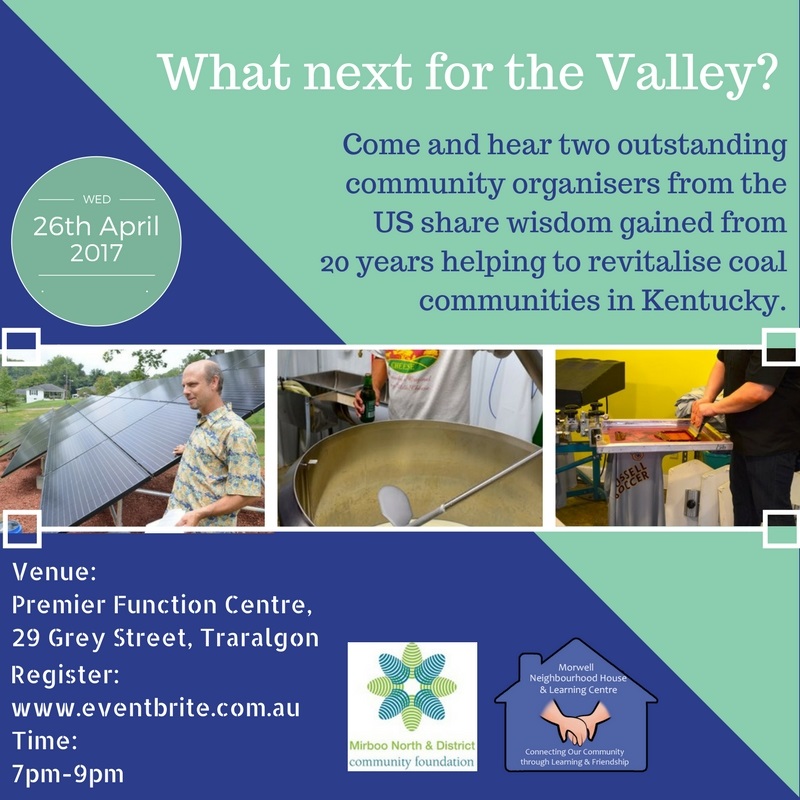 On Wednesday 26th and Thursday the 27th of April, the Australian Environmental Grant Makers Network (AEGN) supported a tour of the Latrobe Valley, bringing their philanthropic supporters, and two community organisers from the US to share their learnings of a coal dependent economy transitioning to something new. The intent was to learn how regions that rely principally on coal extraction can reshape their future and grow a flexible modern economy. Justin Maxson, Executive Director of the Mary Reynolds Babcock Foundation and Lisa Abbott, coordinator of the Kentuckians for the Commonwealth travelled and connected with the communities of the Latrobe Valley in Victoria and the Hunter region in NSW.  Justin and Lisa live in the state of Kentucky, in the Appalachian region.  This was once the largest coal-producing region in the US, and coal extraction through strip mining and mountaintop removal has left a terrible environmental footprint. Once a large employer, the coal industry in now in decline.

In a number of public events and stakeholder meetings, Justin and Lisa shared their experience, and listened to Latrobe Valley stories, success and plans for what is next.  In a sessions facilitated by the Gippsland Climate Change Network (GCCN), Justin, Lisa and AEGN were provided with a high level proposal overviews of grass roots initiatives looking at transition for the region.  These included: Hot Water and Battery Factory from Earthworker Co-Operative; Energy Efficient Homes from Latrobe Valley Sustainability Network; Floating solar concept from GCCN;  Biohubs feasibility project from GCCN; Transition plan from Voices of the Valley; Mirboo North Community Energy Hub; and Zero Net carbon Communities from Baw Baw Sustainability Group

On the Wednesday night, over 150 people attended a presentation by Justin and Lisa.  This was co-hosted by a Mirboo North Community Foundation and the Morwell Neighbourhood House.  The crowd was a very diverse group, not the usual make up you might think would attend a discussion about a community moving away from Coal. Observed were council  CEO’s, councillors, industry and business leaders, state government leaders, young, old, innovators amongst the midst of community grassroots leaders in the Valley. Many commented after on the fantastic mix of the crowd, and the number of new faces. Justin and Lisa began to by setting the scene of what they experience is of their community in transition.  See this powerful intro here.

As an observer, I have to say that I was thoroughly impressed with the respect and dignity Justin and Lisa brought to the conversation, one which remains raw and emotional in Latrobe Valley. The similarities and relevance of the two scenario’s (Appalachia and the Latrobe Valley) had lots of heads nodding. It was reassuring and sobering that their community, possible 5-10 years ahead of the Latrobe Valley, doesn’t have all the answers, but is happy to share the learnings. It is also reassuring that a number of positive initiatives are similar.

“If we can grow an economy that works better for people in the region, if we can grow a politics that is more participatory and gives folks a voice in a place that has been dependent on the coal industry, where our politics and our economy have been shaped by the same extraction that is threatening the planet, it is an example that will resonate across the country and potentially the globe”. Justin Maxon

If you want to learn a little more on what is happening in the Appalachian transition, which refers to the some of the initiatives that Justin and Lisa’s organisations support see this video and an article by the New York Times. Also of interest here.