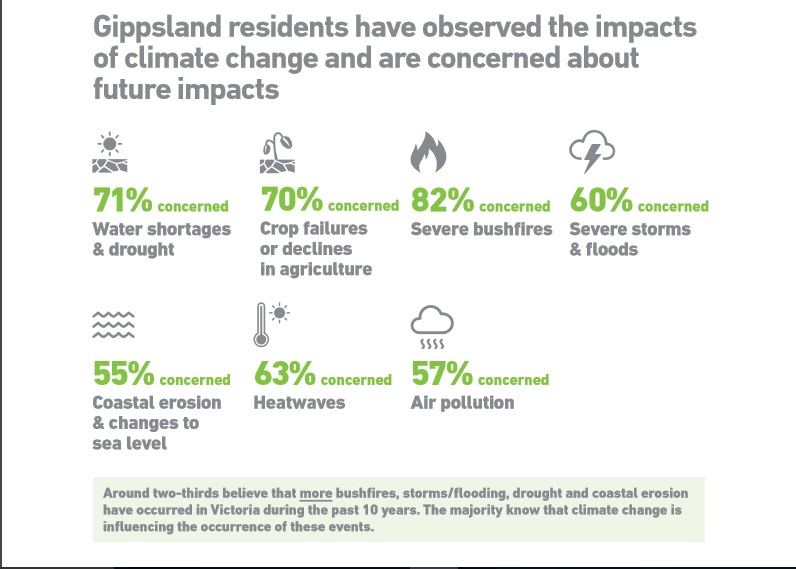 A recent blog of mine pointed out that having an opinion on climate change is irrelevant as far as the eventual outcome is concerned. The point being that even if we don’t do something about it it’s going to happen anyway. This also applies to the opinions of all climate denialists – those that completely disregard, ignore or even fight against the science and the evidence.

On the other hand personal opinions have a very strong influence on politics. And whilst in the long run the opinions of the ‘do nothings’ and ‘don’t knows’ does not matter politics is the battlefield on which we must fight the issue now. Vested interests and those fighting change have long recognised and used the fact that to influence public opinion is vitally important.

Recently Sustainability Victoria commissioned a highly reliable survey of the attitudes and opinions of Gippslanders on climate change. See here.  The results are interesting. The good news is that an overwhelming 94% of locals accept that climate change is happening and thought that it is at least partially caused by humans. A further 69% indicated that climate change ‘requires urgent action now’. They are concerned about the impact of climate change on bushfires (83%) drought and water supply (70%) and heatwaves (63%).

These opinions probably arise from a number of misconceptions including confusing climate with weather.  But the failure to ‘connect the dots’ indicates a widespread misunderstanding, or ignorance, of the role of the greenhouse effect. Accepting the cause is natural or that nature is even partly responsible removes much of the incentive for action.

Our political representatives, both state and federal across greater Gippsland are either Liberals or Nationals. Both these parties are reluctant to adopt climate mitigating policies and include a small number of vocal and powerful climate change deniers. New England is an area that is at the frontier of fossil fuel development of both coal and CSG in Australia. As the by-election there indicates the Nationals are very hard to budge and may be the last to change even though their actions in promoting coal and CSG are harmful to all electors including their supporters and the direct opposite of what is urgently needed.

We need politicians – either independents or a party that has some conservative appeal and is not perceived of as ‘left’ – to contest the seats of these parties and of the ‘climate deniers’ in their ranks in particular. But even they will not gain much traction until much larger numbers of country people realise that climate change is being caused by our own activities. In particular burning fossil fuels.