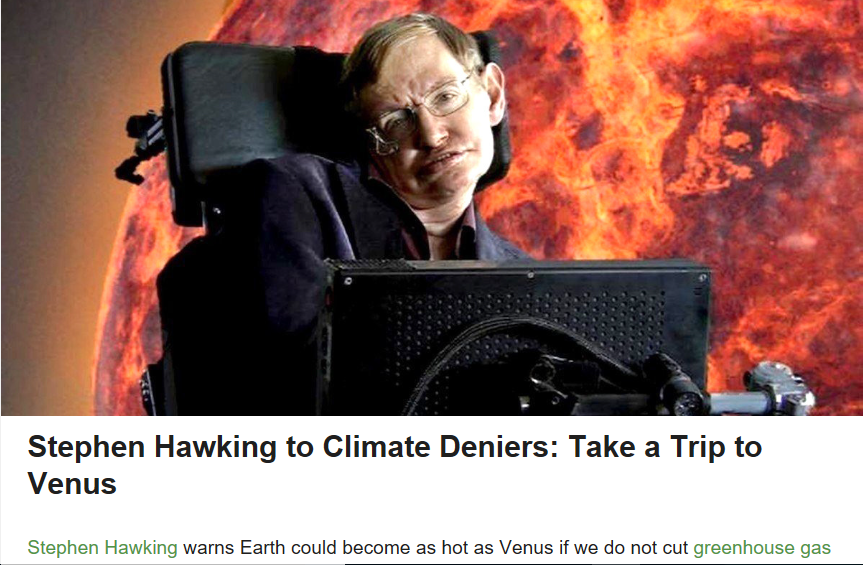 I have not left the ‘Bay’ out of the header, as in Venus Bay (named in 1798 after the ‘evening star’ by George Bass) in South Gippsland. I am referring to the companion planet of Earth, sometimes also called the ‘morning star’ that has, because of its size, an atmosphere and a greenhouse effect. In fact Venus has experienced a ‘runaway greenhouse effect’ where the average temperature of the planet is over 400 degrees C where solids or earth such as lead are in liquid form and the planet’s atmosphere is mainly composed of carbon dioxide – identified as the main greenhouse gas on Earth.

Recently I tweeted a brief review of episode 2 of Stephen Hawking’s Favourite Places. The review noted:

“NASA explains that for up to 2 billion years of its early history, Venus may have had a shallow liquid-water ocean and habitable surface temperatures. However, due to its position to the sun, the planet’s water eventually evaporated. With no water left on its surface, carbon dioxide built up in the atmosphere and led to a runaway greenhouse effect that created Venus’ present hellish conditions” and “‘This is what happens when greenhouse gases are out of control’, Hawking said, implying that our own planet could also meet the same fiery fate. He then [amusingly] quipped, ‘Next time you meet a climate-change denier, tell them to take a trip to Venus; I will pay the fare.’”

The atmosphere of Venus was the subject of early study by James Hansen who has often been called the ‘father of climate science’. Hansen applied his models of the Venutian atmosphere to Earth and has been warning of the threat of global warming since 1988. Amongst his many other achievements he is the author of Storms of My Grandchildren (Bloomsbury, 2009) is a founder of Citizens Climate Lobby and  advocate of the ‘fee and dividend’  alternative to the carbon tax.

Whilst the planet most Gippslanders can see in the early mornings and evenings is otherwise seemingly remote its importance in this context is that it verifies the science of the greenhouse effect and shows why it is necessary to act to curb our carbon dioxide emissions as soon as possible. It is another way of looking at the greenhouse effect that I have not described before.