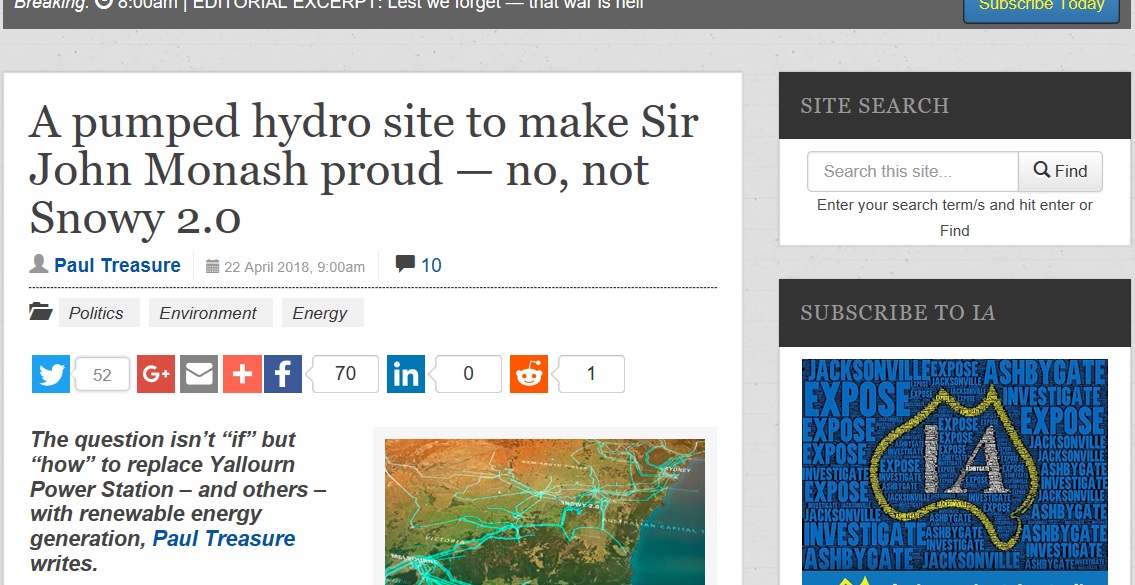 Paul Treasure’s blog last month on a PHES project adjacent to the Latrobe Valley attracted substantial interest. On the positive side it offered an energy storage that could more than replace Yallourn W – now the dirtiest coal fired electricity generator in Australia. It also made use of nearby Latrobe Valley infrastructure making it far cheaper than the Snowy 2.0 project and perhaps most important of all provided jobs for Gippslanders.

On the downside the proposal attracted some criticism mainly in the form of threats to biodiversity caused by construction of an upper dam adjacent to the Baw Baw National Park. In particular the threat to the endangered Baw Baw frog was mentioned along with other values of this near wilderness areas. It goes without saying that all projects of this sort need to go through the process of a thorough environment impact statement. The critics also suggested there may be other more suitable PHES sites and that improving energy efficiency may be a possible alternative.

Energy efficiency should lead to a drop in demand and ‘demand response’ a drop in high prices during scarcity. Current flat lining of energy demand in Victoria is probably due to improvements of the former but we have yet to make the serious inroads on demand that are needed. I intend to examine aspects of energy efficiency in another blog and have done a brief account of ‘demand response’ – paying consumers to turn off their power at times of peak demand.

Alan Pears writing his column in the Alternative Technology Association’s RENEW stated “the size and frequency of profitable price gaps [for PHES] depend on many factors. If too many energy storage facilities are built before it [Snowy 2.0] starts operating or demand response trims peak demand (when prices usually peak), the price gap will close. If improving energy efficiency drives demand down, it undermines the economics of all supply options by shifting the balance between supply and demand.”

And “Snowy 2.0 won’t be operating until well after the Liddell coal power station closes in 2022, so a lot of new storage and supply capacity and demand-side measures will need to be introduced before then. That will undermine the viability of Snowy 2.0. Given the rapid growth and declining prices of alternatives, Snowy 2.0 may require big subsidies.”

Whilst there are substantial risks with any large scale investment in Snowy 2.0 or a Baw Baw PHES there are far more involved in building any fossil fuelled power station.

Similarly ‘demand response’ is in its infancy and yet to have any effect on high prices. Much of this will be provided by a cost benefit analysis and the fact that we have to move from the high carbon to the low carbon economy as quickly as possible. From the point of view of the climate emergency action should be taken on all fronts to increase supply via renewables and storage and decrease demand by energy efficiency and demand response.