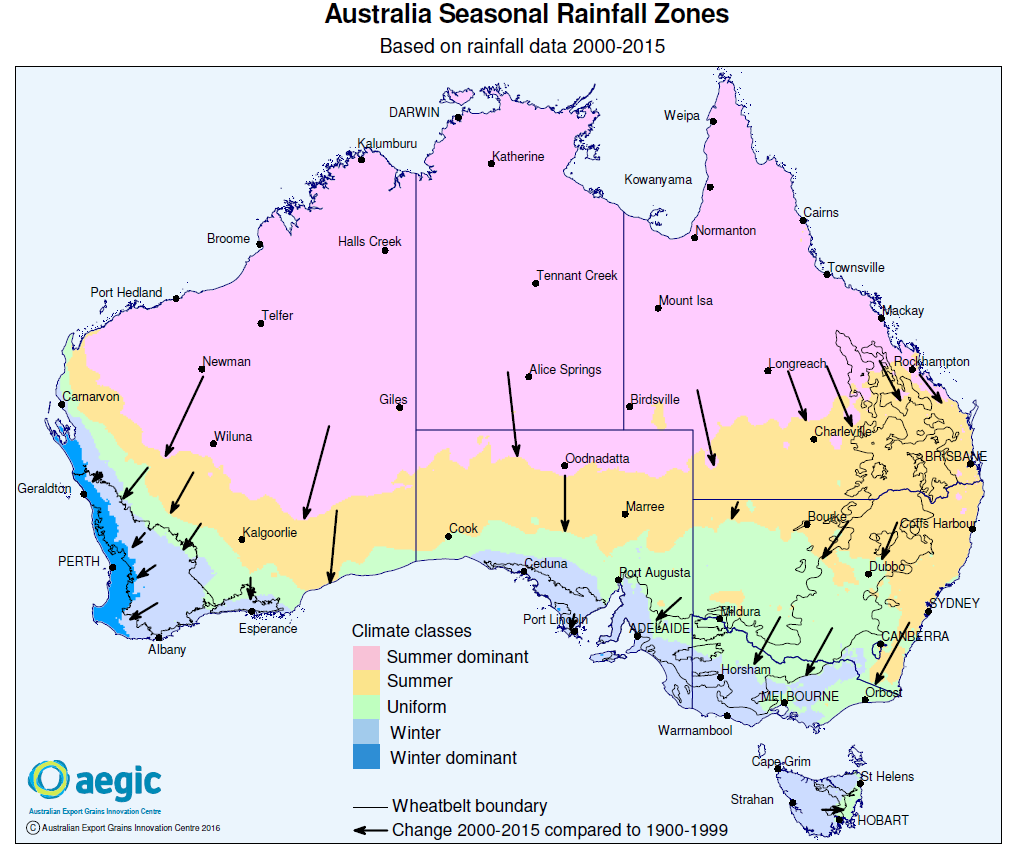 The effect of the earth’s climate belts migrating pole-wards as a result of climate change was outlined recently in a publication of this on Australian wheat production. More specifically it has been mentioned by Barrie Pittock in his blog on the Gippsland coast and the entrance to the lakes. The general thesis is that as the earth warms the tropical and subtropical belts expand pushing the temperate zones and in particular the westerly winds further south. We note however there are a number of complicating factors such as El Nino or La Nina events, or our mountain range, that may alter or disturb this.

Barrie Pittock noted “In short it is that the mid-latitude westerlies are moving further South with global warming, and thus the prevailing westerly winds across Bass Strait are weakening and there are more frequent easterly winds there, and waves from the east also.” In terms of rainfall it is the westerly and south westerly winds that provide the regular rainfall in the region although some parts of the district are in rain-shadow. So that we would expect, and probably are already experiencing, longer and more frequent dry spells with this aspect of climate change. This will affect the whole of southern Australia including the west.

Barrie also noted that an increase in the easterly winds and it is from the winds in this quarter, usually as part of a blocking low pressure system, that Gippsland receives it heaviest rainfall and is often the cause of flooding. To this can be added the fact that our ocean is warming, and quite probably being increasingly influenced by the East Australian Current. As well with each degree of warming, roughly what Gippsland has experienced in the last 50 years, a further 7% of moisture can be held in the atmosphere, leading to heavy rainfall.

Thus we are left with the apparent paradox that with our westerlies drifting to the south we will experience more, and more severe, droughts and at the same time experience more frequent and heavier floods. Anecdotally a combination of the two, as occurred in the upper Tambo River in 1998 where floods followed a short sharp drought, can be most devastating. A reverse of this with the heavy rain followed by the long dry will make the district most prone to bushfires.