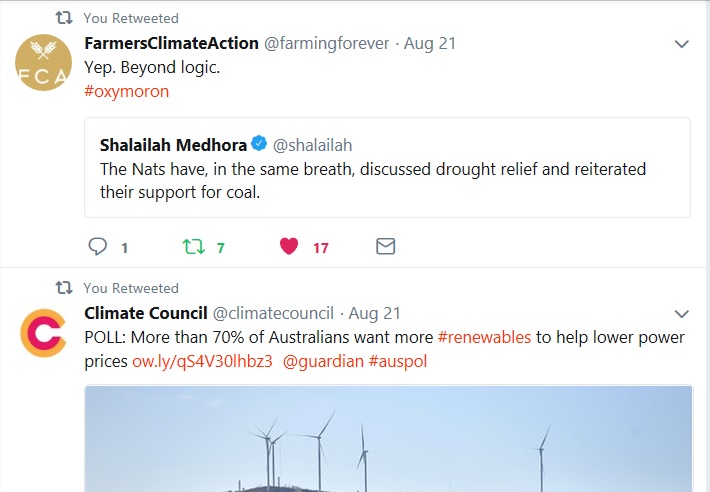 We will be having a State Election in three months. And the precarious nature of federal politics means that we could actually have a federal election sooner rather than later as well. Currently the conservative, pro-coal National Party controls Gippsland East and South Gippsland. The current Independent member for Morwell is an ex National. Further west the seats of Narracan and Bass are held by the Liberals. Like the Nationals the Libs have no position on climate change and are antagonistic towards renewable energy.

But of all these seats only South Gippsland has been held consistently by the Nationals in modern times. Morwell should be a Labor seat and both Narracan and Bass (formerly West Gippsland) have been held by Labor although Susan Davies later was an Independent. Gippsland East had Independent Craig Ingram prior to the current National incumbent. The current sitting member of South Gippsland won in 2015 against a liberal candidate but required preferences to win. We may conclude from this the current monopoly of ‘safe’ conservative seats is not impregnable.

In a recent survey Sustainability Victoria found the issues of public health and jobs were foremost in Gippsland citizens eyes whilst climate change was down the bottom. Circumstances in the near future may alter this. If, for instance, the current green drought continues up to the election or we have a run of early serious bushfires. Many on the social media and even some farmer’s organisations are now making the connection between climate change and the current drought and noting the absurdity of the Nationals promoting coal yet claiming to represent farmers.

Opposition candidates who accept the overwhelming evidence of the science of climate change and can point out how these important issues are connected to, or influenced by, climate change are urgently needed. It is not necessary for the incumbents to be unseated – just that they be given a shock. It is possible that if strong Labor and Independent candidates are fielded, that the preferences of the greens and other independents flow though to them and there is some media support the election might produce a few surprises. And as the dry continues the odds of this occurring increases.

Every time someone mentions or complains about the drought reply with two words – climate change – and ask them who they are going to vote for.