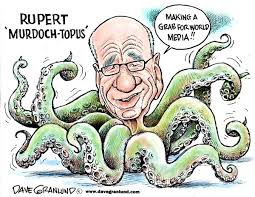 Currently calls are being made for Exxon – the long running climate change denier – to face charges and fines for their denial in the same way as the tobacco industry is now being forced to do. I have written previously on criminal negligence and loosely defined it as “the failure to take action against something that causes harm.” This presupposes the offender is aware that their actions may cause harm and does nothing about it. Worse still they may make every effort using all their available resources to present the opposite view, or at the very least to create confusion and doubt. The latter action was the path taken by the tobacco industry and equally so by Exxon.

Writing about the, at best abysmally slow, actions of governments to mitigate climate change Tim Flannery in his Atmosphere of Hope recently noted: “Some companies bear a disproportionate share of the blame for this sorry state of affairs. The most important by far in the media is the Murdoch news empire, from Fox News to the Australian newspaper and the many tabloids that help shape public opinion. It’s extraordinary to think that a media empire overseen by Rupert Murdoch, a man whose father was a frontline news reporter in World War I, continues in the twenty-first century to impede progress on this most vitally important issue.” (p.72)

To ‘balance’ the books The Melbourne Age has just published (3.11) an opinion piece by climate change denier Christopher Booker. The lie that there is a ‘debate’ about climate change is still found across the media. But the debate – if there was any – about climate change and its obvious human origins is long past. There is debate about how bad climate change will be and whether there will be abrupt harmful changes that we as a species can do nothing about. Flannery cites the 374 additional deaths caused by the 2009 heatwave in south-east Australia – an event that in turn was influenced by climate change.

Still fighting against the overwhelming evidence supporting basic greenhouse physics we have the bile of the ‘flat earthers’ – Andrew Bolt, sundry ‘shock jocks’ and other supposedly more sophisticated parts of (mainly) the Murdoch media, along with too many of their foolish followers in Canberra. Their monumental ignorance is no longer an excuse. They must now be aware that the misinformation, lies and distortions they have written in the past and continue to peddle is causing harm and may have already contributed to the premature deaths of hundreds of Australian citizens.

That is criminal negligence. The case against the climate criminals is only beginning and the media’s spurious attempts at balance must carry a large part of the blame. As an interesting postscript it has been suggested on the social media recently that all climate change deniers be disbarred from public office.