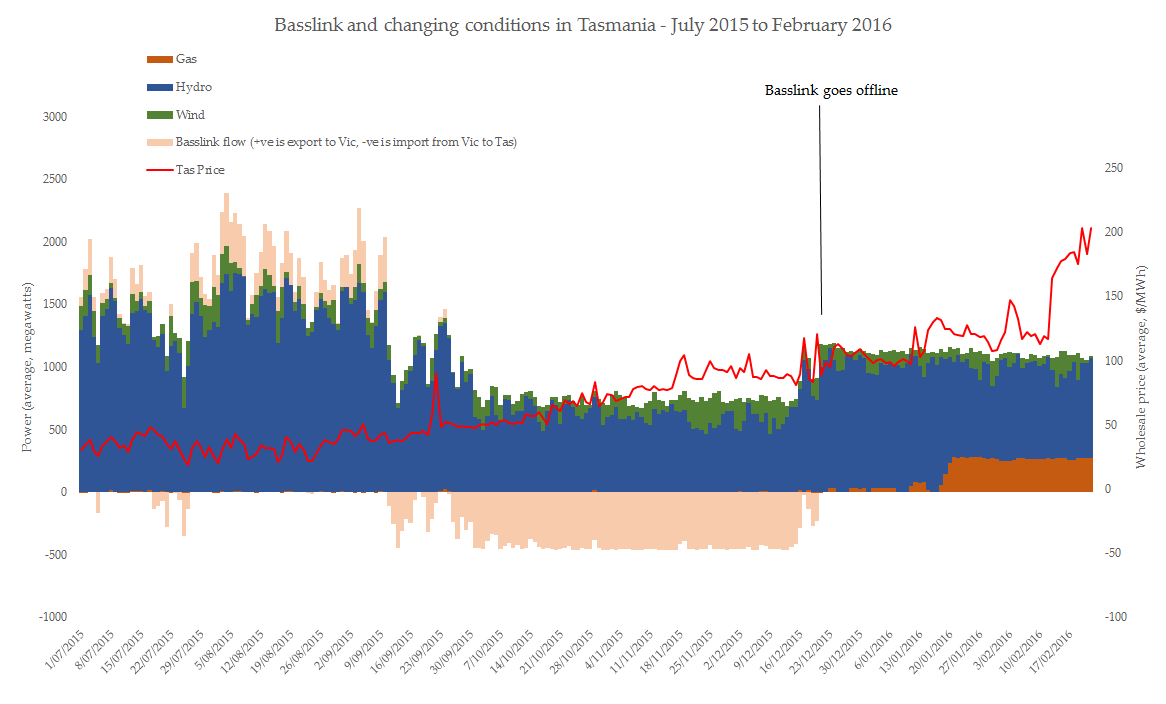 My last piece on Basslink and the Taswind Project attracted some criticism on the social media. Taswind was cancelled in 2014 because the cost was too high and therefore not feasible. The 3 main factors which appear to have influenced the decision to not go ahead were the price of copper, the exchange rate of the dollar – both then very high – and the loss of the carbon price with the election of the Coalition in 2013. Two of these conditions are far more suitable now than 3 years ago, and the third will eventually return in some form or other – possibly sooner than we think.

A lesser criticism was that even if Taswind had gone ahead the second High Voltage Direct Current (HVDC) cable would not have been completed and thus would not help alleviate the current crisis. However Basslink was commenced in 2003 and completed in 2005 – less than 3 years. If the Taswind project had been started in 2014 then the HVDC cable should have been laid sometime this year. When the emergency associated with the failure of Basslink (and the other factors mentioned in my previous article) became apparent the completion of the Taswind cable would have assumed priority and be quickly finished and working if it was not already doing so. Now Tashydro is faced with exorbitant power costs as gas and diesel generation is brought into play. The Basslink fault (as of 1.3) remains undiscovered and Tashydro faces its first loss in 10 years.

The problems of Basslink and Taswind boil down to a lack of understanding at all levels of politics of the threat of climate change and the political failure to act to mitigate and adapt. HVDC cables generally should be a tool to help with these problems evening out power loads across the nation as they allow large amounts of power to be transported long distances with minimal losses. Peter Seligman in his Australian Sustainable Energy by the numbers (MEI/Melb.Uni. 2010) advocated connecting the eastern grid with WA in association with pumped hydro storage on the Nullabor. The HVDC cable he argued could pay for itself very quickly by exploiting price differences in the energy market (pp.45-6). The Taswind project was similar but with wind turbines on King Island instead of pumped-hydro, and of course, small by comparison. The advantages he outlined for the HVDC cables should also apply here.

As the need to act on climate change becomes more urgent what is feasible, possible and impossible changes. More than anything else these necessary actions become a matter of political will. It will then not be a question of whether it can be done but how it can best be done and best be done quickly. Also the financial (feasibility) restrictions will disappear. It will no longer be a matter of cost. It will become a matter of reordering priorities – both political and financial. And then the Taswind project can be recommenced with urgency.