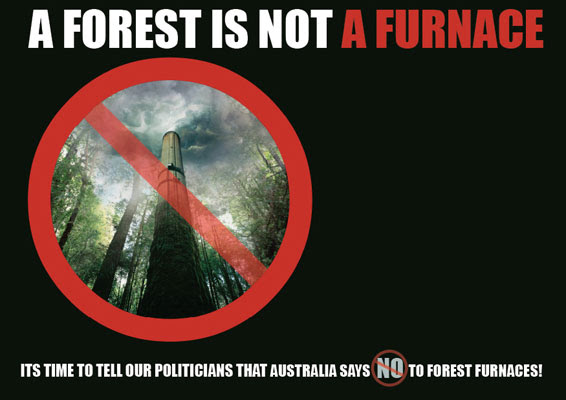 Tasmania’s logging proponents are now pushing that its forests should be cut down and sold as furnace fuel – for jobs, for making forests less prone to bushfires (when in fact it’s the opposite) and as a so-called ‘renewable energy’. NSW is also trying to justify this latest nutty idea with Mickey Mouse reports issued by government logging supporters. In Victoria, VicForests is planning to add biomass burning to its future market plans.

This is in response to the export woodchip market having taken a nose dive in the last couple of years. Plantations are replacing native forest wood in building and construction as well as supplying most of the global trade for the pulp for making paper. ABC Radio National revealed the leaked ‘commercial in confidence’ documents in May 2015 showing VicForests is keen to sell our forests to fuel electricity furnaces as ‘renewable energy’. Without a new market for industrial fuel-wood, logging in many regions will be doomed.

Right across the country, the native forest logging industry remains massively subsidised; a glorified work-for-the-dole scheme. It destroys public property for the profiteering of a few. Federal Environment Minister Greg Hunt cleared the decks for the burning of native forest biomass last year with the introduction of the Renewable Energy (Electricity) Amendment Bill. So VicForests’ plans to shovel East Gippsland’s beautiful forests into power generators, coupled with the Federal government’s financial assistance for forest burning, and it’s a sinister match made in hell.

The definition of waste under the Renewable Energy Target is so loose as to allow an entire hillside of trees to be termed ‘waste’ if just one is cut as a sawlog. This is the same argument we heard in the early 1970s to justify woodchipping and clearfelling. Will the public swallow this again? We don’t think so.

To claim that it is renewable energy because trees grow again is ludicrously simplistic. The purpose of the RET legislation is to reduce emissions – now; logging and burning makes for immediate large increases in emissions, that will take 200 years to be drawn down again. For the amount of electricity generated, wood is a far dirtier and more polluting fuel than coal. Allowing native forests to be fed into power furnaces as ‘renewable’ gives another financial blessing to forest destruction. Logging can claim Renewable Energy Certificates (RECs). This would make it more economical to log and burn forests but it would also rob limited REC money from helping genuine renewables like solar and wind. For further information go to http://eastgippsland.net.au/news/burning-forests-for-electricity