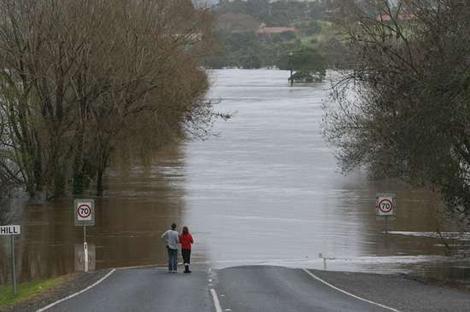 Predicting the next big flood in Gippsland is almost impossible. But the El Nino and the La Nina both seem to bring us major, and extreme, weather events. The El Ninos are usually associated with severe droughts. The 1982/3 El Nino was a very strong drought followed by the Ash Wednesday bushfires which fortunately did not affect Gippsland. I remember the Tambo River being dry for miles without as much as a pool or puddle.

The 1997/98 El Nino brought on a short sharp drought in the Omeo district where small sand dunes formed in the lee of the foothills in the Little River Valley around Easter – a heartbreaking sight. In June the drought broke on an early Queen’s birthday weekend and was followed at the end of the month by torrential floods when half our annual rainfall – about 325mm – fell in one week. The rain washed the soil from the bare paddocks into drains, creeks and culverts. Houses were isolated and a small number inundated. There was classic TV footage of Crisps low level bridge floating down Swifts Creek and there were substantial losses in drought weakened stock. This was the last time a severe El Nino was followed by a La Nina.

The two events are not necessarily associated and we have had La Ninas in 1989, 1998, 2007, 2010-12. They are generally associated with heavier rainfall than usual and frequently associated with flooding in Gippsland and elsewhere in Victoria. Thus we have had floods in 1989, 1998, 2007, 2011 and 2012. There was widespread flooding across north central and north western Victoria with the last La Nina. So much water fell on Australia in this last event that the world average sea level actually dropped by a millimetre or two. These natural weather events are compounded by global warming – each succeeding El Nino appears to be getting warmer and drier. Each La Nina appears wetter – with the warming atmosphere holding more moisture.

Now in 2016 we are just coming out of the latest and most severe El Nino. Most of Gippsland and especially the east has escaped the severe drought usually associated with this event although as you travelled west from Sale the rainfall dropped off and some parts of South Gippsland were dry. In many parts of the western district the drought has been severe. Now the Bureau of Meteorology is predicting we have a 50/50 chance of a La Nina. So far much of Gippsland has escaped the severe effects of the El Nino but the La Nina may be yet to come. Are we to expect a flood of 1998 proportions or bigger? And if so, where and when will it fall? Is it too late to put our money on June or July?