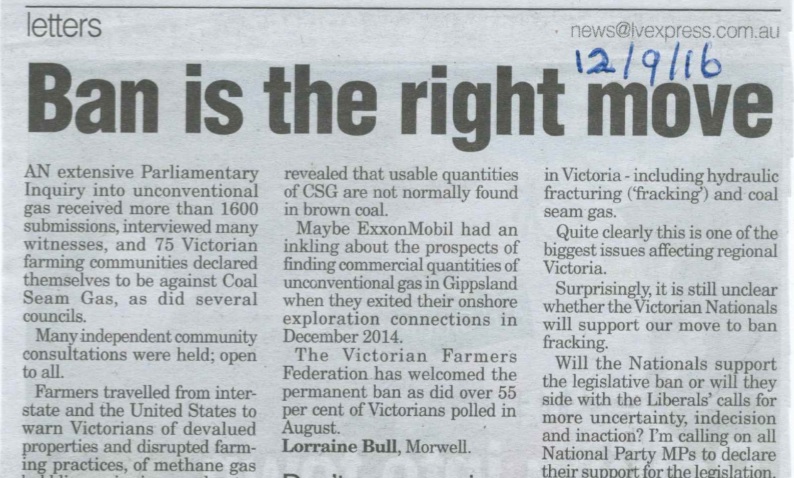 An extensive Parliamentary Inquiry into unconventional gas received over 1600 submissions, interviewed numerous witnesses, and 75 Victorian farming communities declared themselves to be against CSG, as did several councils.   Many independent community consultations were held; open to all.

Yet it is now suggested that the well-considered and informed decision of the Andrews government to ban unconventional gas should be overturned to create thousands of jobs in the Latrobe Valley; skilled jobs often done by fly in/fly out workers.  Our clean green agricultural industry is worth $111.6 billion, employing over 190,000 people. Perhaps those looking for work should consider agriculture which is becoming increasingly reliant on backpackers and overseas workers.

A little research would have revealed that usable quantities of CSG are not normally found in brown coal. Maybe ExxonMobil had an inkling about the prospects of finding commercial quantities of unconventional gas in Gippsland when they exited their onshore exploration connections in December 2014.  The Victorian Farmers Federation has welcomed the permanent ban as did over 55% of Victorians polled in August.

(Eds. Note: we are opposed to any fossil fuel development as a source of extra greenhouse gas.)