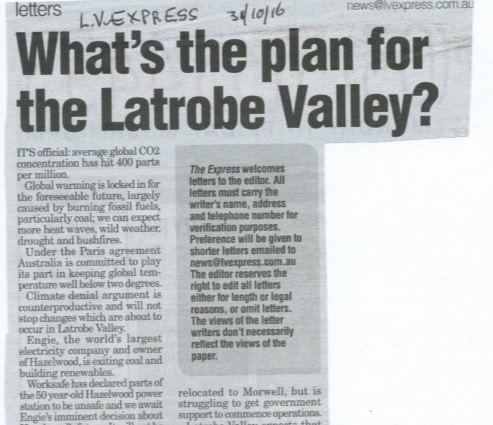 It’s official: average global CO2 concentration has hit 400ppm. Global warming is locked in for the foreseeable future, largely caused by burning fossil fuels, particularly coal; we can expect more heat waves, wild weather, drought and bushfires. Under the Paris agreement Australia is committed to play its part to keep global temperature well below 2 degrees. Climate denial argument is counterproductive and will not stop changes which are about to occur in Latrobe Valley.

Engie, the world’s largest electricity company and owner of Hazelwood, is exiting coal and building renewables.   Worksafe has declared parts of the 50 year old Hazelwood power station to be unsafe and we await Engie’s imminent decision about Hazelwood’s future. It will not be the first or the last power station to close. In light of the 400ppm climate milestone, both the federal and state governments must urgently work together to formulate and enact a transition plan for affected coal communities, and hopefully will do better than in Port Augusta where  400 jobs were lost with little replacement. With forethought, investment in new economic activity should already be in place in Latrobe Valley.

The Victorian government has allocated $40 million for a Latrobe Valley Transition Fund. Minister Wade Noonan recently stated that the government is interviewing ‘investment facilitation specialists’ to get out and network, to work with local business and try to attract new opportunities into the region’ and expected these people will commence in coming months. Is there any urgency indicated?   $1.2 million of the fund has been spent on an abattoir in Trafalgar, and more on a new building. Allocation of $40 million has been extended into wider Gippsland. How much will be left over to support the central Latrobe Valley area, where unemployment is already above state average?

Environment Victoria is taking the problem seriously and has published Life After Coal, listing 5 employment opportunities: residential energy efficiency retrofitting, commercial building energy efficiency, Voices of the Valley’s State Energy Transition Centre, a sustainable pre-fabricated housing construction industry and solar hot water manufacture. Earthworker’s solar hot water co-operative has already relocated to Morwell, but is struggling to get government support to commence operations. Latrobe Valley expects that government transition funds will be used in Latrobe City for employment security and community security, and I call on politicians, unions, academics, local business and the community to seize the opportunities which the inevitable energy transition will offer.