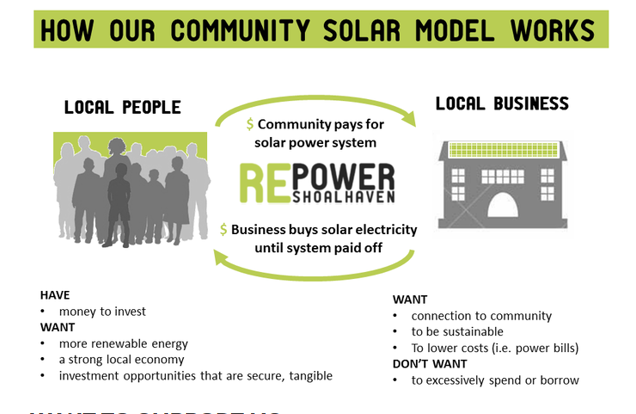 Some friends from Bairnsdale recently attended a meeting of the Mirboo North Community Energy Hub – a community energy project. The Hub has been functioning since 2012, is a regular promoter of renewable energy events attending local markets and has an interesting website. The meeting earlier this month was attended by over 100 people and addressed by four speakers including Imogen Jubb from Beyond Zero Emissions.

The purpose of the meeting was to launch a Community Energy Feasibility report funded by the State government. I remain somewhat cynical of such studies and reports having experienced a number of similar consultancies designed to improve the economic situation in the high country that led to miniscule gains. (At one stage my bookshop in the hills had a room full of reports most of which had been ignored by administrators)  In many ways they are ‘reinventing the wheel’ and so this is a waste of scarce resources. I am aware of at least two successful models of community energy projects – the Hepburn Wind Farm (which required a relatively large investment) and Repower Shoalhaven (which operates on much smaller solar projects) – which could easily be adopted or modified.

As well there has been a small group of individuals (including yours truly) in Bairnsdale U3A meeting to discuss the possibility of local community energy projects. The East Gippsland Shire Council has a grant to study the viability of community energy projects and identify the best locations for them. In Mallacoota a group has been active for some time trying to establish a micro-grid to make their power supplies more reliable. I have suggested previously that this could readily be secured with a portable diesel generator and that overtime this could be turned into a power system dominated by renewables and storage. No doubt there are many other projects I have not heard of.

It seems to me that the Repower Shoalhaven is the best model to get projects happening quickly. From an investor viewpoint alone they have the advantage of using your savings locally rather than having them finance an Adani coal mine, a real estate development in outer Sydney or in bonds on Wall Street – and at a very attractive return of 7% on a 10 year investment. These projects can be of any size and because they provide jobs locally one wonders why local governments have not entered the field. Perhaps we need a Repower Gippsland.