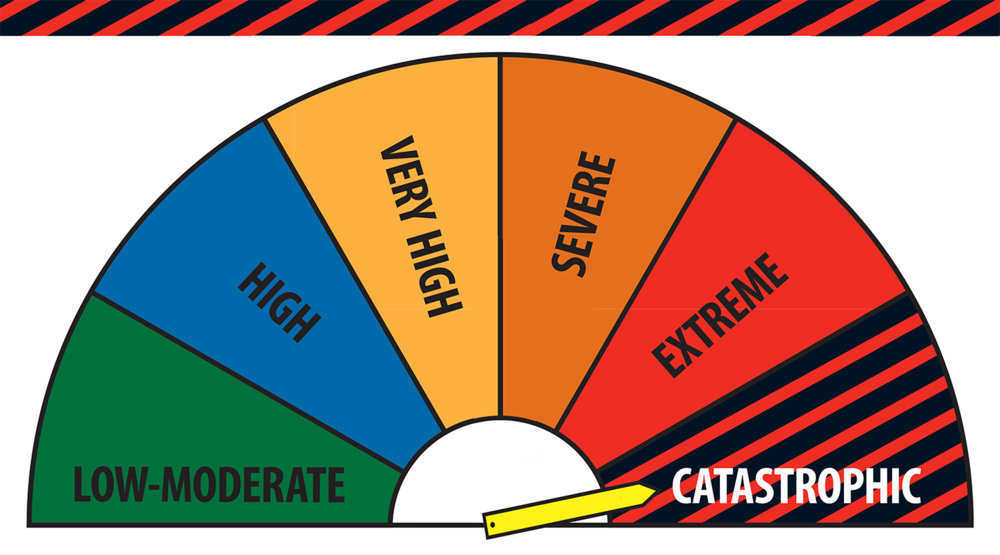 My worst-case near future scenario for Gippsland is as follows:

A wet winter across the region and the mountains with subsequent lush growth is followed by an abrupt swap from spring to summer. The weather changes from warm and friendly to hot and scorching, and the country dries out rapidly with the pastures across the region browned in a week or so. Then comes the first heatwave – three days in a row where the temperatures soar above forty degrees and the winds blow steadily from the north-west.  “Code Red” – formerly catastrophic – fire bans are instituted and the Fire Index sets a new record.

A lull in the hot weather is followed by a series of dry thunderstorms with 10,000 lightning strikes across the Alps and Gippsland with fires appearing everywhere. The CFA and Forestry fire fighters are stretched beyond capacity for any organised fighting of fires. They retreat to defend property and the towns. Even there it is fierce battle with many isolated buildings and farms and structures on the periphery of the towns burning down. Fires are kindled by burning embers falling like rain often miles ahead of the main fire. The open cut coal mines all catch fire and power supplies are cut across the state. The emergency begins with train and other public transport cancellations, road closures and evacuations of vulnerable citizens from threatened localities. But like the old song there is “nowhere to run / nowhere to hide”.

The heatwave returns again with scorching air being fanned out of the red centre by strong north winds. The temperatures are modified by the heavy smoke cover over Gippsland but the fire danger index again goes off the scale. In the large towns residents crowd into supermarkets and theatres with their own power supplies and air-conditioning. The fires eat into the outer suburbs of the city and a number of the larger towns. The number of buildings lost is in the tens of thousands and casualty lists from the fires and heatwaves is well over a thousand. Eventually many of the fires in the east reach the big break – Bass Strait – whilst cooler weather enables the emergency services to gradually control all but the coal mine fires. These, like Morwell in 2014, will burn for months.

This is what awaits us – perhaps this summer, or the next, but probably, unless we are very lucky, within 15 to 20 years. It will be just one of many unpleasant reminders of our failure to act decisively on climate change.