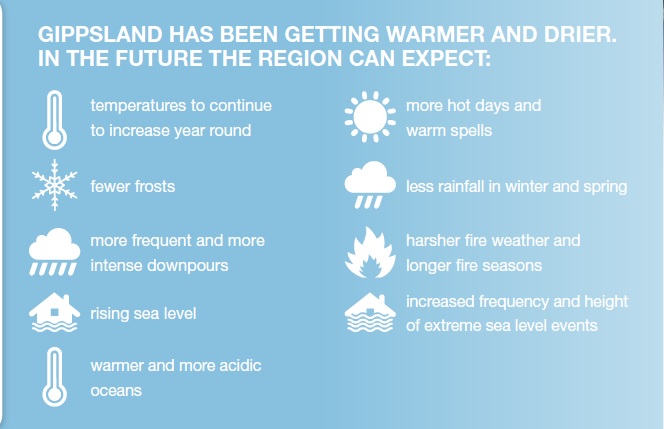 The bad news about climate change was spread around the world in the late 80s by James Hansen. In 1990 the conservative British PM Margaret Thatcher made a landmark speech (and one for which she will ultimately be remembered) to the United Nations on this matter. Thus politicians and bureaucrats around the world, and more importantly from our local perspective in Victoria, have been aware of possible adverse effects of climate change since this time. These effects included more of, and increasingly severe, extreme weather events – droughts, floods, heatwaves with related bushfires, sea level rise as the ice melted and various threats to life and property. As well there were, and are, a bevy of ‘unknown unknowns’ that may affect the very existence of humanity itself. To counter these possible outcomes a number of responsible actions were both judicious and advisable.

What then were these responsible actions? They should have been designed to reduce and eventually stop all activities that contribute to greenhouse gases in the atmosphere – that is those burning fossil fuels and industries relying on cheap fossil fuels like aluminium and the timber. This plan should have been implemented over time with the least possible disturbance to society and the economy. Substantial planning should have commenced then and been treated in a bipartisan fashion supported by all political parties. Unfortunately these industries – oil and gas, brown coal electricity generation and much of the timber industry – are concentrated in Gippsland. Instead of science and common sense vested interests have opposed even the smallest changes necessary and exploited to their advantage both the adversarial nature of politics and the public’s dire concern over employment.

The planners have been missing in action all this time and some government actions have made matters worse. Far beyond anything else the privatisation of the SEC in the 1990s has been an unmitigated disaster – for employment, for planning and above all coping with climate change. Politicians, bureaucrats and the conglomerates purchasing the mines and power stations must all have been aware of the warming threat. So Hazelwood has continued producing its dirty – in terms of carbon pollution – electricity well beyond its planned date of retirement. The conglomerates have profited by streamlining production (read putting people out of work), rapidly depreciating their assets, running the operations on minimal maintenance and ignoring the problem of climate change.

The same applies to Heyfield which is a slightly different though related situation. The Kennett Liberal government emasculated small bush towns with 101 cuts to improve the economy (read cutting down on employment). The logging industry became increasingly centralised and carbon intensive. There are two reasons to phase out logging as quickly as possible – to cut down on a carbon intensive industry and to preserve the forests as a carbon store. Naturally enough the valley and Heyfield residents cling to every job that they can.

What then is the answer? In the short term the Victorian government should re-employ any dismissed workers that cannot find alternative employment initially as locally as possible. There must be more jobs available than those being lost.  In the longer term this will probably involve conscription of some kind. But above all some planning has to be brought back into the system whereby the problem of climate change is given priority and engineers and planners show the pollies how it should be done. Without careful planning the anger and reaction will continue to grow.