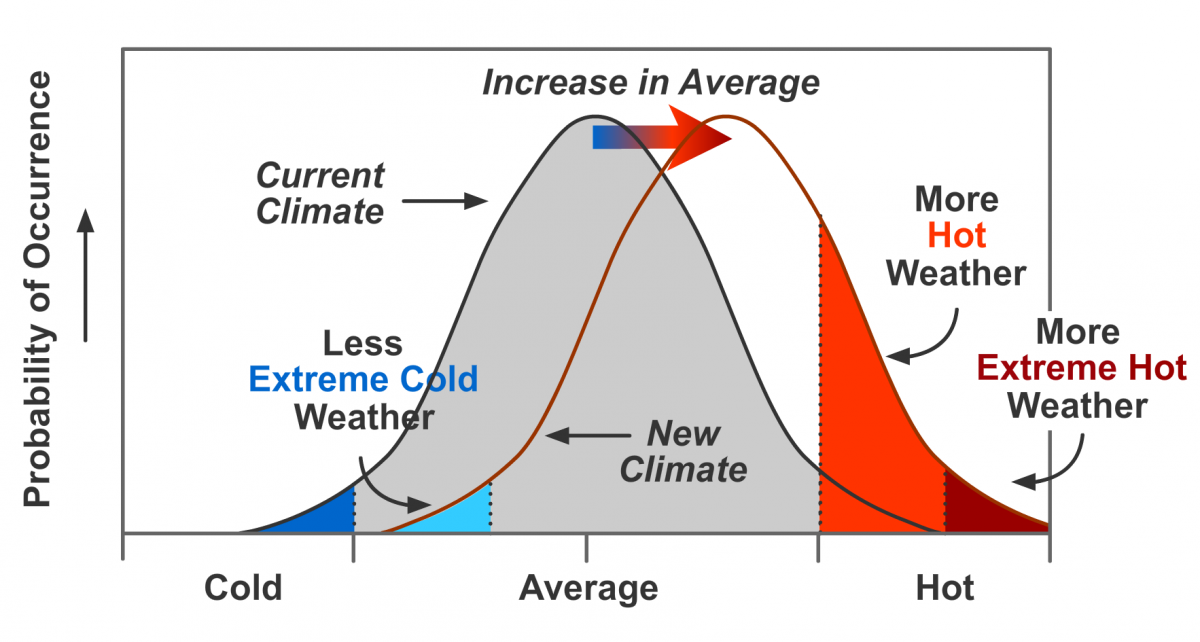 The normal curves illustrated above are an excellent simplified representation of how extreme hot days increase with climate change. A normal curve is defined as “a bell-shaped curve showing a particular distribution of probability over the values of a random variable.”  In other words the curve represents the frequency that specific information occurs – in this case temperatures. The vertical axis here represents the frequency of days and the horizontal axis the range of temperatures. The average temperature occurs at the peak of the curve and is represented by the most number of days. The extremes representing the hot and cold are found at the edges of the curve.

The two curves show both old and new temperature patterns – the curve on the left representing the old, and with global warming, being shifted to the right to form the new curve. It becomes obvious that with the warming there will be less extreme cold and far more hot days. In particular what we previously considered very hot days become far more common and on the far right the extreme temperatures are now all record breaking. However the above graph is an oversimplification in that as average temperature increases the new normal curve tends to become wider and flatter as in the following example.

This means that whilst the number of warm records increase substantially, there are still the occasional cold records, but with less average days and the range of temperatures is increased. The extreme weather events now occurring in North America appear to be replicating this and verifying the work of Jennifer Francis and others on the northern hemisphere jet stream. It should also be noted that the right hand curve is not static and continually, if gradually on a human time scale, moving to the right as the earth warms. Eventually as the average temperature keeps increasing those days that we once considered warm to extremely warm will become the new average. Unchecked the rising temperatures alone would, and will, eventually make the earth uninhabitable for humans.