A recent article in New Scientist by Fred Pearce (8.4.17) outlined the sorry state of affairs in the Arctic. The greatest warming on earth has been occurring above the Arctic circle. Over the last 30 years not only has the minimum summer sea ice drastically declined so too has the ice volume – now about a third of what it was in 1975. Compared with the average (1981-2010) the air temperature was 2 degrees warmer, the ocean 5 degrees warmer and during the 2016 heatwave an incredible 15 degrees warmer. Pearce noted: “What happens in the Arctic doesn’t stay in the Arctic. Studies show that the shrinking ice cap is effectively helping to warm the rest of the planet. It may also be changing your local weather.”  Arctic expert Peter Wadhams has been predicting the complete loss of summer sea-ice in the near future –within 15 to 20 years

Put simply the two poles are the earth’s air conditioners and the Arctic is in diabolical trouble. There are a number of factors – called feedback systems – that are already increasing the rate of warming and may help increase it dramatically. Two of note are the ice albedo affect and the release of methane. Ice and snow reflect most of the energy from the sun back into space. As the Arctic warms the sea ice melt increases exposing more ocean which in turn absorbs more energy and gets warmer. This in turn melts more ice and exposes more ocean. There is a large amount of methane – a far more powerful greenhouse gas than carbon dioxide – locked up in ice, the ocean floors and in the permafrost. As the arctic warms more of this is released causing more warming. As with the loss of ice each warming forces a further and increased warming. Under some circumstances this could constitute “runaway” global warming. 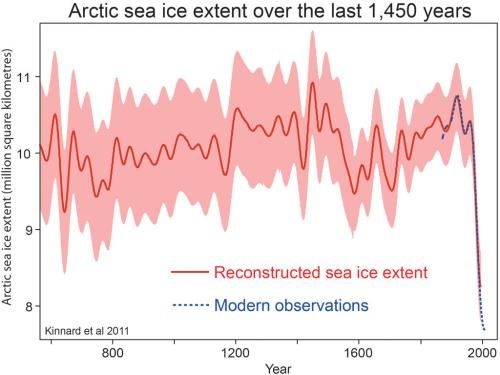 So how does this affect Gippsland? Most of extra heat in this process is absorbed by the oceans which in turn is transported around the globe. The extra heat also causes the water of the oceans to expand and gradually increase sea levels. Any disappearance of the Arctic sea-ice puts a lot more pressure on the Greenland ice sheet causing melting which contributes directly to sea level rise. The latest worst case scenario is now a 2.7m rise by 2100 and at that rate downtown Lakes Entrance, and a score of low lying coastal villages on the 90 mile and around the Gippsland Lakes would be inundated. Well within the lifetime of someone born today.

But sea level rise is only one of many aspects of a warming planet. Often accompanying the rise will be storm surges (east coast lows) and heavy rainfall causing floods – the so called ‘perfect storm’. Flooding will increase and be more severe over the years until eventually Lakes and other places will go permanently under. The coast will also retreat from 50 to 100 times each metre of sea level rise. Thus with the worst case scenario the foreshore at Lakes will have disappeared well before 2100. At the same time there will be an opposite and probably far more frequent chain of events – droughts, summer heatwaves and bushfires – as well many other warming threats to existence not clearly understood or recognised.