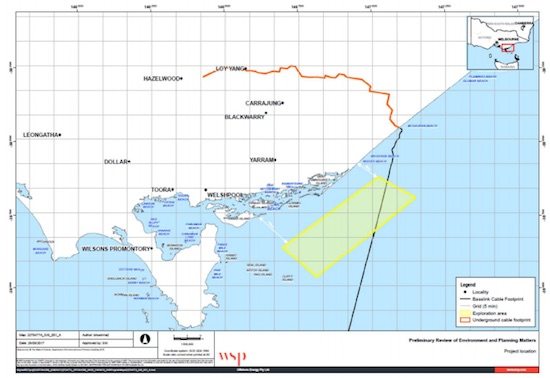 In the news across the media recently has been the bold plan to erect up to 250 wind generators on offshore Gippsland.

The ABC noted that “Plans for an Australian-first offshore wind farm off Victoria’s south-east coast, which could provide almost a fifth of the state’s energy, have won cautious government support. The Wind farm could provide 18 per cent of Victoria’s energy and power 1.2 million homes. The Project still needs government approval. Federal, state ministers have given early support.”

“Offshore Energy has been working with the Federal Government on a feasibility study for the 250-turbine proposal, and will present details of the plan to a Victorian Government-led energy roundtable in Churchill today. The wind farm — which would be built 10–25 kilometres offshore in waters near Port Albert — would spread over 570 square kilometres in Commonwealth waters, and could provide 18 per cent of the state’s energy. Offshore Energy’s managing director Andy Evans said the $8 billion project could reduce carbon emissions by about 10.5 million tonnes per year.”

Reneweconomy noted: “On the upside for locals, the offshore wind farm is expected to generate investment of around $8 billion, create 12,000 jobs during the construction phase and 300 ongoing operational and maintenance jobs” and that the construction price per megawatt was dropping all the time.

As can be expected there was some reaction on the social media. Someone, for instance, tweeted that a fraction of the money proposed for the offshore wind farm could have kept Hazelwood open. Hazelwood however was closed by private enterprise and if you don’t like that blame Jeff Kennett or your local member. Also the prospect of keeping Hazelwood open only prolongs the agony of the ‘just transition’ from coal to renewables. Thirdly it is in a planning stage only with lots of bureaucratic and financial hurdles to pass and will be built gradually over time.

On the downside farmers will miss out on any rental that they would have received from on shore installations – currently about $10,000 pa for each generator, or $2.5 million per annum to the region. On the bonus side it is in Gippsland, it connects to the Latrobe Valley infrastructure, provides substantial employment and is supported by the local member Darren Chester, though he appears yet to get the link between coal and global warming. But it is a plan of substantial size and vision and the first of many needed for the ‘just transition’.