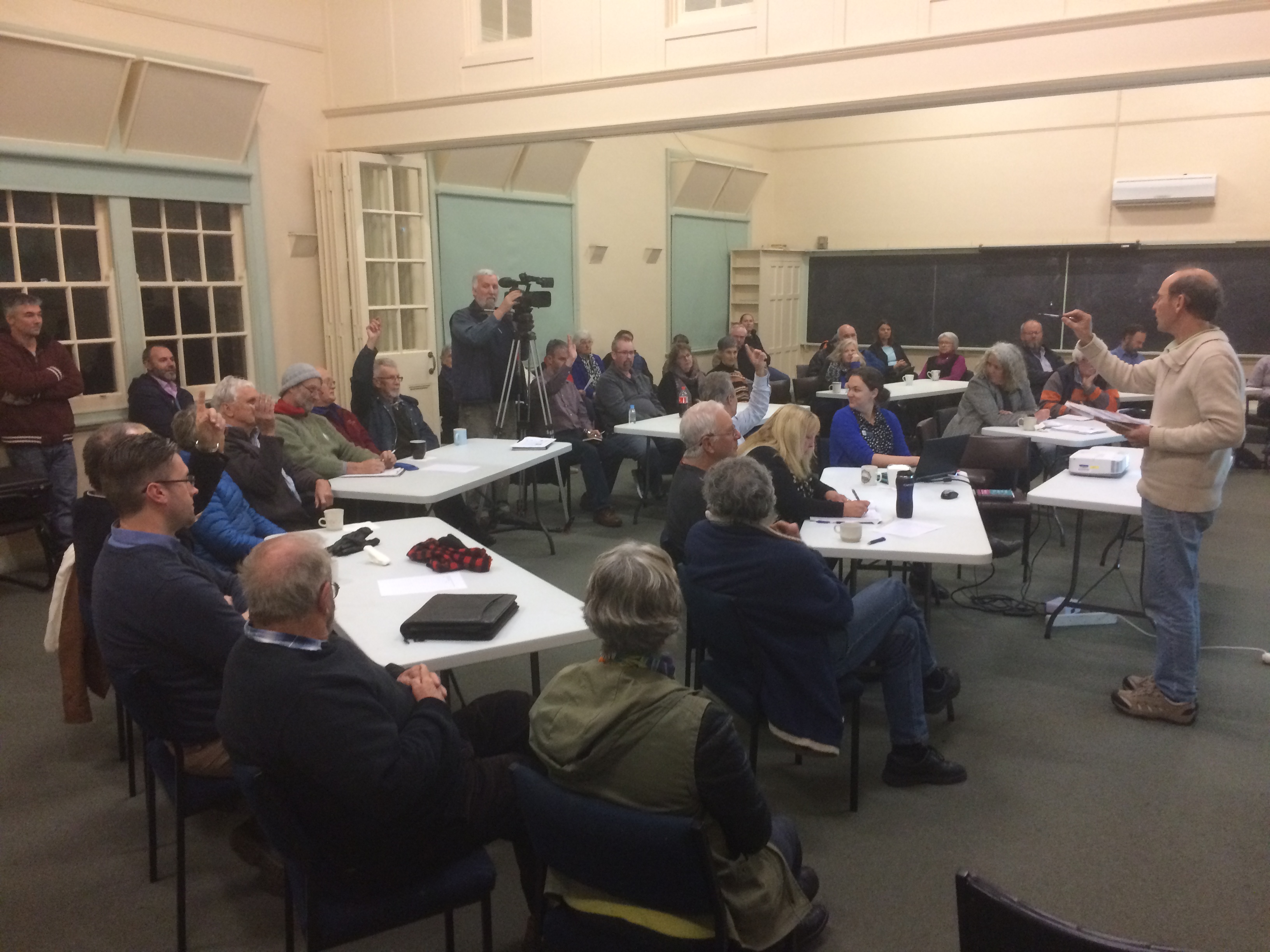 About fifty people attended the information night on Community Energy in Bairnsdale on 20 July run under the auspices of the East Gippsland Shire Council and the Gippsland Climate Council Network (GCCN).

The meeting covered a wide range of related topics mostly about solar, but also including wind, bioenergy possibilities, community education and energy efficiency. Some of the discussion was quite technical and beyond the understanding of part of the audience. For instance there was some discussion on ‘demand response’ – where consumers, usually large ones, are paid not to consume electricity – that went backwards and forwards between some of the more technically minded members of the audience.

A variety of more or less complimentary aims for community energy projects emerged including energy independence, energy security, financial independence and reducing our greenhouse emissions to help mitigate climate change. The research undertaken on behalf of East Gippsland Shire indicates that over $11 million leaves the Shire in electricity generation payments (which also highlights an opportunity). To this can be added the savings of the Shire which, through the big four banks, is also mostly invested elsewhere.

Ian Southall of the Mirboo North Energy Hub and GCCN replaced the advertised speaker Chris Weir from the Bendigo Sustainability Group who had unfortunately caught the flue. Ian is a good friend who has run the Renewable Energy Demonstration Trailer working in schools and communities across Gippsland for five years. He gave an account of the pitfalls that their continuing community energy plans have faced.

As far as I am aware there are no Community Energy projects producing energy in Gippsland. (The South Gippsland Energy Innovation Co-op may have their community energy project of solar PV running but on which I cannot find any information.)  So the speaker for the Bendigo Sustainability Group, which has a number of them up and running, was missed.

Rob Passey clearly outlined the options available to the community, including having functioning micro-grids for small communities at the edges of mains power (Mallacoota, Omeo, Buchan, Dargo), bulk buys of solar panels, and options for organisation and financing of various projects. He also gave brief accounts of some of the operating projects including Repower Shoalhaven.

It is not a matter of choosing between alternatives but going ahead with the best, fastest and easiest options. This could include a number of different projects running consecutively. My preference is for the Repower Shoalhaven model where projects of up to 100kw of solar are installed behind the meter. What is required is organisation, mainly of financial aspects, in which the shire could play a major role. I for one, would be happy to buy a share or help finance putting enough solar on my favourite shire building, our library.