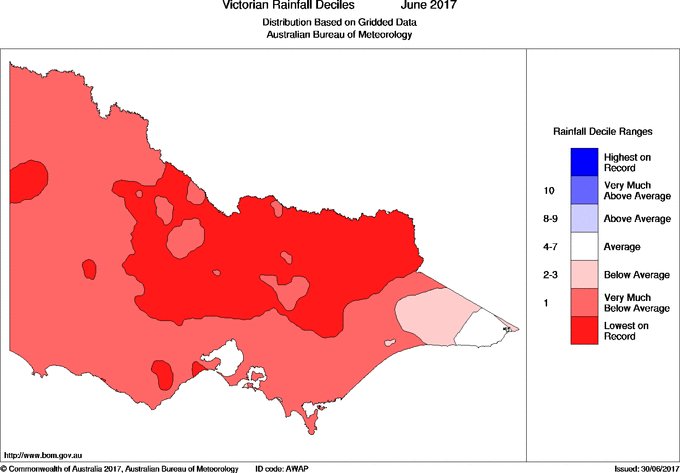 The East Gippsland News (5.7.17) featured Bairnsdale’s record cold frost last Sunday. The report seems fairly accurate but it was accompanied by a front page photo of a wall of ice on a Calulu farm. This was misrepresentative as the farmer, due to the very dry June, had left his spray irrigation on overnight making his system an ice making machine.  Invariably what follows these cold snaps is the usual ‘climate change is bullshit’ claptrap. Of course it is not – the frost merely a tiny contribution to even Gippsland climate records where for this one day Bairnsdale was colder than Mt Hotham.

As one who has spent most of his life in the high country winter frosts were, and no doubt still are, the norm. These were common and often severe during dry winters with clear skies for weeks on end. Anecdotal accounts of solar hot water panels (incorrectly called ‘solar panels’ and confused with PVs) freezing to bursting went round Bairnsdale. If correct the owners of these panels had neglected to have cheap protection systems installed on them. These have been available for many years and I had them installed on my solar hot water panels in Ensay (frost country) in1986. Basically a thermostat opens a valve when the temperature gets too cold and drains cold water from the panels and replaces it with hot water from the tank.

Being used to frosty weather the frost in town did not seem so bad and was probably only minus one or two degrees. This is probably because of the ‘heat island effect’ (where the towns store heat in roads, masonry and buildings) and because of the need to eliminate this bias from records the Bairnsdale weather station is at the Airport about 8 kilometres from town.

It may come as a surprise for some that such record colds are still quite compatible with global warming. The CSIRO calculates that the ratio of heat related records to cold that are broken is six to one. In other words we still get the cold events and records but these are far outnumbered by the hotter ones. In a steady climate system (if such a thing could exist) hot and cold record events should be roughly even. I have written about this a number of times before (see here) using a normal or bell shaped curve as representative of our climate. With climate change the curve is moving to the right or the warmer side of the graph and the average days are also doing so, that is getting warmer. Sometimes for the ease of simplicity the shape of the bell curve remains unchanged but in reality the curve is also getting flatter. This means we have less average days but far more warm ones with still the occasional extreme cold.

The Bairnsdale frost was a significant local weather event but nothing major in the scheme of things except perhaps as an indicator that the country is drying off.