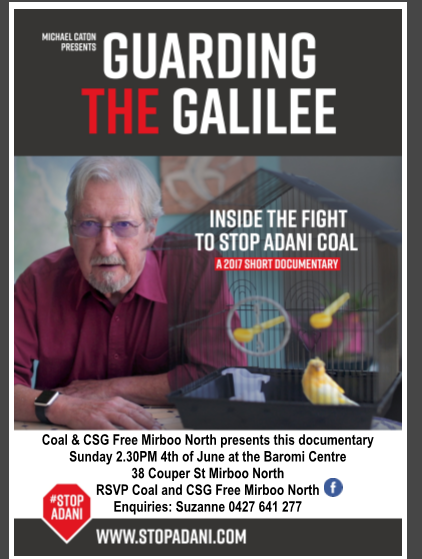 The BBSN hosted a screening of Guarding the Galilee on Thursday 27th July. Michael Caton hosted the 30 minute documentary on the background behind the proposal to build the country’s largest thermal coal mine in Queensland and the compelling reasons to stop it:

• It will add enormously to greenhouse gas pollution

• It is being given unfair, free access to huge volumes of water that other users must pay for.

• It threatens the health of the Great Barrier Reef and the 65,000 jobs that rely on it

Adani has a record of environmental and social vandalism. Adani has a complex corporate structure that utilises foreign tax shelters which means it will pay little to no tax in Australia. The justification for the development being that it will provide 10,000 jobs is a lie. The federal LNP is proposing to use $1 billion of tax payer funds to build the required rail link to the coast in a process shrouded in secrecy through the Northern Australia Infrastructure Fund.

After the movie we had a discussion about how we might be more involved in the fight to stop the mine. Think Global Act Local was mentioned as were the lessons learned from the successful onshore gas campaign. Ursula Alquier reminded us of the power of a community taking action on their own terms and setting the agenda.  There is a local Stop Adani group in Melbourne who would benefit from our support- please consider joining them.