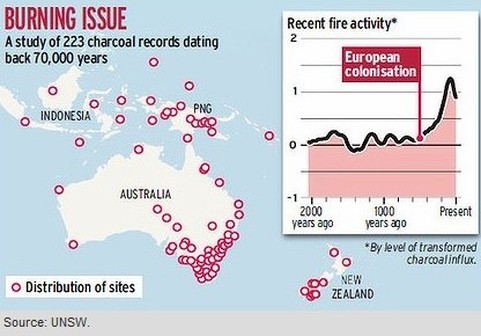 One of the problems with the social media is that people often see an image without reading the article associated with it and jump to erroneous conclusions.  I am fairly certain that such was the case when my controlled burn article was recently criticised. The implication of the criticism was that as Aboriginals had practiced ‘firestick farming’, using gentle controlled burns, across Australia in pre-European times it was therefore okay to do so now. This was a simplified version of the Gammage thesis – itself a simplified generalisation.

Bill Gammage’s book The Biggest Estate on Earth: how Aborigines made Australia (Allen & Unwin Melbourne, 2012) was released to general acclaim and awarded many major prizes.  He came to Bairnsdale as the keynote speaker at a seminar organised by the East Gippsland Wildfire Taskforce (EGWT) in November 2014. The EGWT was a pressure group comprised of the mountain cattlemen and the timber lobby. They were campaigning for a widespread and regular burning of forest and bush areas – basically advocating indiscriminate burning. Gammage gave an aura of respectability to what was otherwise a procession of biased and anecdotal accounts. His talk implied that everywhere was burned without exception regardless of rainfall, terrain, vegetation, aspect or soil type when obviously this was not so.

With regards our region much of Gammage’s work strongly relies on a few pages of Alfred Howitt’s Eucalypts of Gippsland, yet a closer examination of his works can give you facts opposing, as well as supporting, the Gammage thesis. None of the claims Howitt made applied to East Gippsland, much of which he thought a ‘jungle’. Further large tracts of west and south Gippsland were impenetrable scrub according to both the Strzelecki and Brodribb parties and therefore unburned in the years before they were traversed.  At a recent seminar in Bairnsdale Gunaikurnai descendant Wayne Thorpe denied that the practice of firestick farming was used in Gippsland at all.

So where, if anywhere, in Gippsland was burned in the pre-European era? Howitt’s observations apply mainly to the Omeo district high country and the observations of Strzelecki and Brodribb indicate that a number of large plains in central Gippsland were the most likely to have been frequently burned.  The paradox is that all these areas are now substantially farmed or closely settled and thus protected from all burning except the occasional bushfire.

How does this relate to climate change? All burning produces CO2 and the only possible justification for large scale controlled burns in Gippsland and the alpine country now is if it protects the forests from catastrophic fire. Evidence for this is not clear and there is a suggestion that the over-use of controlled burns – as implied by Gammage – may actually promote fires.  I may at some future date do a more detailed analysis of the historical and scientific evidence on this subject.