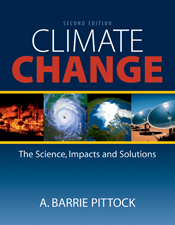 We occasionally see the term ‘tipping point’ in the mainstream media when discussing climate change. Frequently it is misused to describe change or abrupt change and various analogies are offered to describe it. One from a Melbourne ‘safe climate’ activist described it as slowly pushing a wineglass full of wine away from you. At a certain point gravity takes over and the glass crashes, spills and breaks.  As this analogy indicates the ‘tipping point’ is a ‘point of no return’. It is the change from one state of climate to a new one and from which there is no going back.

Barrie Pittock in his Climate Change (CSIRO Publ. Melb. 2005 pp.37-8) quotes Richard Alley, chair of the Committee on Abrupt Climate Change who wrote in 2002: “Large, abrupt climate changes have repeatedly affected much or all the earth, locally reaching as much as 10 degrees C in 10 years. Available evidence suggests that abrupt climate changes are not only possible but likely in the future, potentially with large impacts on ecosystems and societies”.

Pittock notes that Alley is writing about “abrupt climate changes that can occur when variables that are gradually changing push the earth across some instability threshold. He likens this to how the slowly increasing pressure of a finger can flip a light switch from off to on” and it “should be added that such a switch cannot readily be turned off again, due to large delays or inertia in the climate system: it is more like one of those sensor switches used for lighting, which can be turned on by some sudden movement but only turn themselves off in their own good time.”

The possibility of a ‘tipping point’ being passed threatens our civilisation and our lives. Whether the threat is the high wet bulb temperatures which I have mentioned previously here and here that makes parts of the earth uninhabitable, whether it is catastrophic sea level rise as posited by James Hansen (see below), whether it is the continuous drought that created the Syrian crisis, floods of biblical proportions or some raging bushfire that eats around the edges of our cities consuming homes and lives we cannot know. Quite possibly all of them may affect us one after another. We do know that global warming is an existential threat and, if people stopped to consider, realise we are in a climate emergency.

With hindsight we should have been acting on the momentous challenges posed by global warming and climate change thirty years ago. It is definitely time to act now.