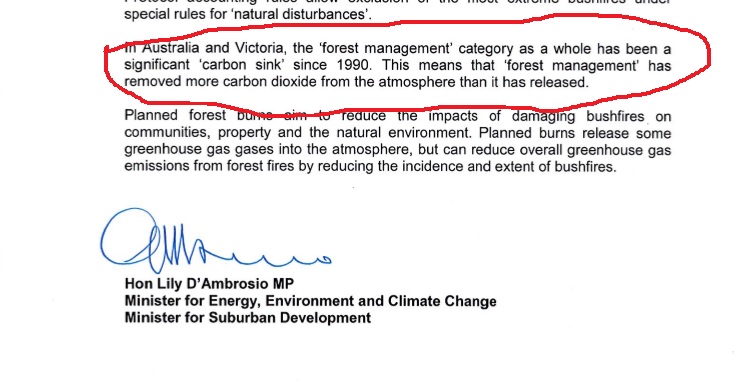 I note the Victorian Minister for Energy, Environment and Climate Change Lily D’Ambrosio in an answer to a question in parliament recently stated Victorian ‘forestry management’ was a significant ‘carbon sink’.  This, she said, was according to Kyoto Protocol accounting rules. How could this possibly be done? Is this a ‘pea and thimble’ trick?

After a brief survey of the Kyoto accounting literature (National Inventory Report 2015) and not completely lost in the detail two aspects so far seem important to the ‘carbon sink’ statement – the initial amount of carbon stored in the various forests and whether reafforestation projects are counted as part of the account.

Under Kyoto reafforestation the rules only cover land cleared before 1990 and then reafforested. Are the blue gum plantations of the Howard tax dodge era relevant to this? As they were all planted on cleared land are they included in these accounts as carbon sinks? Generally speaking they were planted on marginal pastoral land with inadequate regular rainfall for blue gums and many are now being ripped out. Most were poorly maintained making them fire hazards and some were destroyed by fire in Gippsland in 2009. Are these phantom sinks still counted in the carbon accounting?

Many questions remain as to how logged coupes are accounted for? Are they treated as carbon neutral in that they are replanted more or less immediately? This disguises the fact that to recover the carbon lost in each mature logged coupe may take the best part of 100 years and that they therefore are not carbon neutral until then. Thus areas clear fell logged in Gippsland nearly 50 years ago are still not carbon neutral and will not be until 2070. How many of these coupes did not regenerate? I have not been in the bush for many years but remember a large coupe on the Angora Range where the regeneration failed completely and there was just a large bracken patch.

My own, perhaps flawed, accounting assumes the latest science that 1900 tons of carbon are stored in a hectare of mature ash forest is correct. So I was surprised that the top grading in the Kyoto accounting, and presumably used by DELWP, was only 250 tons per hectare and above. A loose definition at best! How much carbon do the accounts say is in each logged coupe? The discrepancy is amazing and when the amount stored by a single mature tree is probably in the vicinity of 100 tons common sense indicates that the latest science is much closer to the mark.

The Kyoto forestry rules are obviously being misused. The main concern of our governments, and more so the relevant departments, appears to be seen to abide by the rules rather than trying to help solve the problem of climate change. That indicates that they either do not understand the problem or how serious the consequences of inaction are. Can the minister can spell out in detail how her conclusion was arrived at?