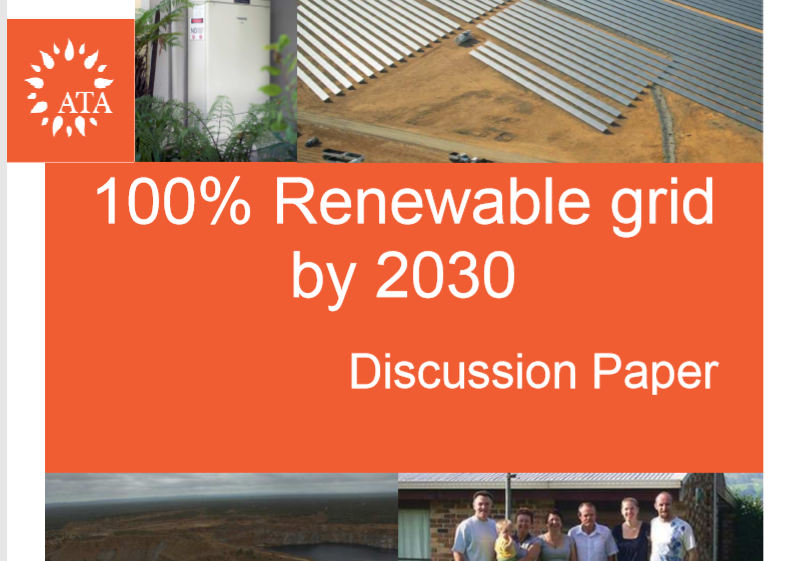 The aim for 100% renewable energy in Australia by the year 2030 (and much earlier dates) has been around for some time. It was the main platform of the Renewable Energy Party in 2016 and a quite achievable goal. It is a goal that could be achieved on a much faster timescale with strong political support and sound planning. The pioneering report in this area of policy was done by the think tank Beyond Zero Emissions (BZE) who published their Stationary Energy Report in 2010.  This report closely documented how we could get to 100% renewable stationary energy by 2020 and relied on solar thermal plants to provide 60% of the renewable energy and storage required by that time. The first solar thermal plant has only just been commissioned at Port Augusta and the rapid development of photovoltaics plus batteries has probably by passed this option.

Heavily influenced by the BZE report I had my own sketchy outline of how the transition from dependence on coal fired energy to 100% renewables could be done in the Latrobe Valley. This was basically part of my political platform in 2012 and, like most documents of this kind, short on detail. What it did emphasize was the need for planning in this process and to have a “Federal Energy body that will plan, oversee and facilitate the replacement of coal based generation and the rapid uptake of renewable energy.” It also made some suggestions as to how the Valley could utilise its natural advantages. Advantages that include established transmission infrastructure, a manufacturing base, transport and proximity to Melbourne.

Recently there has been a study by the Australian National University  and another by the Alternative Technology Association (ATA) on how to achieve the 100% goal by 2030  the latter based heavily on the former. Contributing author to the ATA report Andrew Redaway summarised their work in the journal Renew (No.142). This summary looked at various aspects of the 100% renewables revolution, including renewable energy capacity, energy storage and energy efficiency. Interestingly, both these reports suggest the drastic increase in energy storage required will come from the Snowy 2 pumped hydro project. Recent remarkable developments in lithium-ion batteries and in particular using the electric car battery as a house battery (known as vehicle to the grid) may be other alternatives.

Where does Gippsland fit in this renewable energy surge coming, whether we like it or not, very quickly. The bad news for the valley and Gippsland is that jobs and big projects such as wind are being developed elsewhere. Our electricity system is transitioning from a highly centralised one to almost the opposite – decentralised to the extent that every house and business can be a generator of power for their own use, for sale, and sometimes to buy from the grid.

Options for Gippsland are only limited by our imagination. Massive rooftop solar installation to houses and businesses, a similar approach with heat pumps, commencing appropriately sited large scale pumped hydro and floating solar projects and expanding the current offshore wind project many times are possible options that come to mind. The transition can be done and must be done. The climate emergency dictates as quickly as possible.