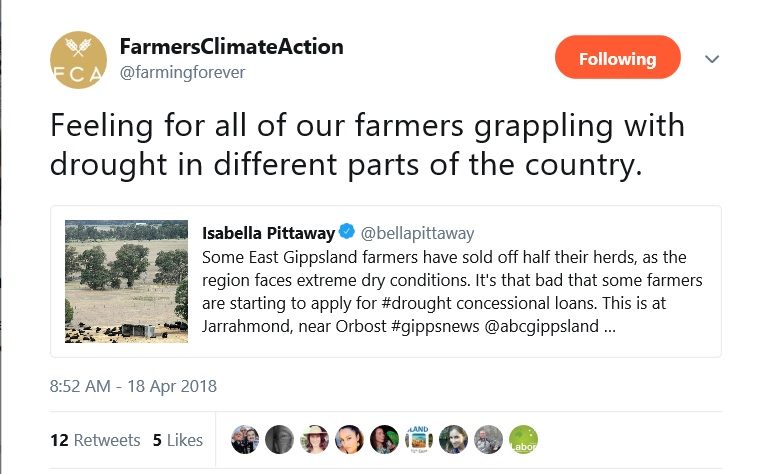 Reports from across East Gippsland indicate the region is experiencing a (so far) short sharp drought similar to those autumn droughts we experienced in 1983 and 1998. A recent trip to Stratford via Perry Bridge and Strathfieldsaye confirmed this with a large number of farmers feeding out and some paddocks heavily overgrazed. The experience of 1998 is firmly in my mind when in the upper Tambo valley we experienced Easter dust storms which left a millimetre of fine dust spread over our furniture inside our house and small sand dunes formed on the south sides of the hills. There followed in June record floods.

The Weather Bureau (BOM) states East Gippsland has experienced a serious to severe rainfall deficiency over the last 12 months. Much of this century our region has been on the dry side although for most of this decade the seasons appear to have been normal to good. The unusual warmth we are experiencing in April (possibly a record?) appears to be heavily influenced by the warm water in the Tasman Sea.

How much of the drought can be attributed to climate change? For a start is can be clearly argued that climate change has been influencing weather patterns all our lives. However it is only since the 1980s that the increasing temperatures and other effects have become more pronounced and clearly observable. Also science has long predicted that the climate change will increase extreme weather events and make them more severe. Barrie Pittock, for instance, in his Climate Change (CSIRO Publ. Melb. 2005) has more than 40 references to drought.

Unfortunately it is a fairly slow process and unable to help us with events that have just occurred or still occurring. Some events are easier to attribute climate change influence than others. For example a 2004 study of a heatwave that occurred in 2003 in the northern hemisphere and which caused 35,000 fatalities “found that climate change had more than doubled the risk of such extreme heat” for this event.

We can conclude that as all our weather is now influenced by the increasing amounts of greenhouse gases in the atmosphere and that the current dry is also influenced by it though by how much we do not know. Interestingly the BOM forecast for south-east Australia is for above average rainfall for May-July. Perhaps we are due for a repeat of 1998?