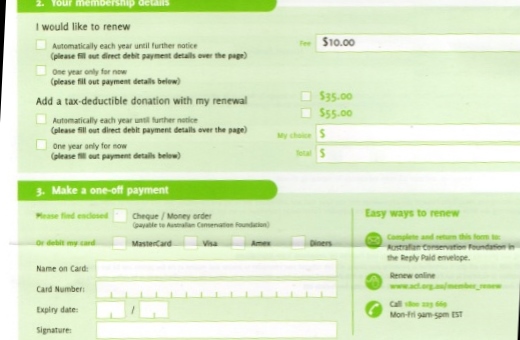 Hardly a day goes by when I do not get an email request, usually from an organization I am sympathetic with, for donations of one kind or another.  These organisations all require funds to function and the more they have the better are their chances of success. The problem in part is that the bulk of the people they are often appealing to have little or no funds to part with.

For most of my life I have been in this category and at times so broke that I could not maintain my financial membership of the two organisations I have continued to support – the ACF (Australian Conservation Foundation) and the ATA (Alternative Technology Association). Now, since retiring and beginning the process of downsizing I have accumulated a small ‘nest egg’ through the sale of assets, and thus in the position to respond to donation requests.

At the same time as downsizing I have continued my political campaigning through candidacy in various elections as a ‘climate independent’ and the funds required – legal deposits (all lost) advertisements, travel – have been substantial and a serious drain on my savings. More recently as secretary of the now defunct Renewable Energy Party I was putting aside funds for its use, promotion and possible political candidacy. With my active political career now coming to a close I can look to use these freed funds elsewhere.

To date with one exception, my political donations have been small. The exception is donating $500 (with my wife) for the last two years to the ATA’s East Timor solar project – which covers the cost of installing solar systems on village houses and the training of a technician. One attraction of this project is that it is technology based and thus apolitical – something some of our dimmer politicians have yet to recognise. Other small donations have gone to local organisations (Earthworker) and climate activists (Climate Council).

The example of a recently discovered second cousin is inspiring.  Following the sinking of the Rainbow Warrior in Auckland harbour in 1985 he decided to make a regular monthly donation to Greenpeace and has done so ever since. For someone in regular employment this remains a possibility.  I prefer the ‘one off’ donation as I still function mainly in the old economy – I can make electronic transfers but prefer the chequebook. Hopefully I will make a few more of these in the coming years helping to promote the climate action cause and a few of its solutions.