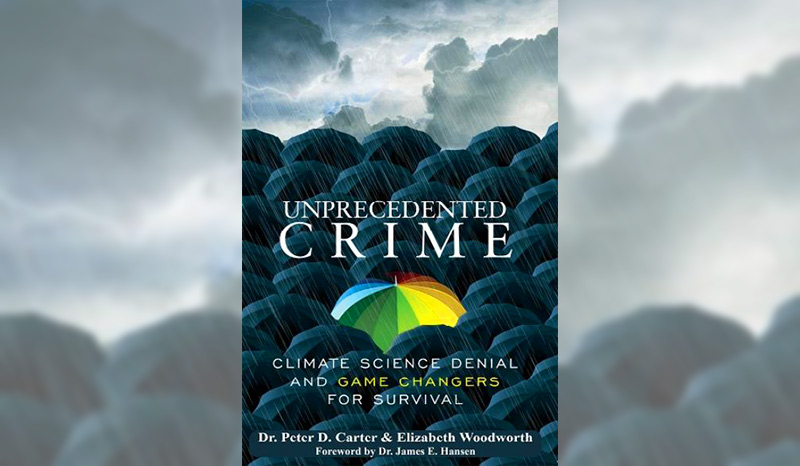 I have just read Carter and Woodworth’s Unprecedented Crime* (Clarity Press, Atlanta, 2018) about the massive crime of climate change. The book has a foreword by James Hansen and is divided into two parts – ‘Crimes against Life and Humanity’ and ‘Game Changers for Survival’. It is my intention to concentrate entirely on the first part of the book where the authors outline their case of climate crimes and against the criminals that perpetuate them.

Very early the authors make the point that the science of climate change has been clearly established since 1990 and companies like Exxon Mobil (of Bass Strait oil and gas fame) have been aware of this huge and life threatening problem much earlier than 1980. The main effect of climate change so far has been to influence the numbers and intensity of extreme weather events including hurricanes, heatwaves and fires causing immense damage and fatalities. They quote one source indicating that about 400,000 human fatalities occur each year as a result of climate change.

As well as Exxon about 1990 a range of fossil fuel companies and related organisations including the Heartland Institute, the Koch bothers and Peabody Coal, decided to protect their business and profits by denying the science, by creating doubt and spreading disinformation. In this they have been successful with the process of concerted action being delayed by nearly 30 years, and with an ignorant denier sitting in the White House. These deniers, the directors and individuals that made these decisions are the first of the climate criminals.

The authors note that climate change denial is a crime against humanity which is “a deliberate act, typically as a part of a systematic campaign that causes human suffering and death on a large scale. (p.46)” The systematic campaign of climate change denial which we have seen over the last 30 years has permeated our media and dominated the political process. Here the media is dominated and lead by News Corp whose influence extends across all media. Between them, and some misinformed and/or ignorant politicians, this influence has made it taboo for any journo to mention ‘climate change’ in connection with a heatwave, with warming oceans, with bleaching of parts of the Great Barrier Reef, or with the current drought in parts of NSW and Victoria. It is a sorry state that, with one or two exceptions, the main reliable source of information on climate change is the internet.

Who then are the climate criminals? Parker and Woodworth devote chapters to a number of categories beyond the original fossil fuel deniers including ‘Media Collusion’ with the spreading of doubt and disinformation (the hoary question of a debate about ‘the science’ comes to mind); politicians, especially in the conservative camp, who have swallowed and in some cases promote, the denialist propaganda; the banking and finance industries still heavily invested in fossil fuels and protecting their bottom line.

Even in Gippsland the climate criminals are obvious with the Murdoch media continuing their flat earth tactics in the Australian and to a lesser extent the Herald Sun. And at Longford Esso continues to release large amounts of carbon dioxide into the atmosphere.

*a copy held by the East Gippsland Shire Library