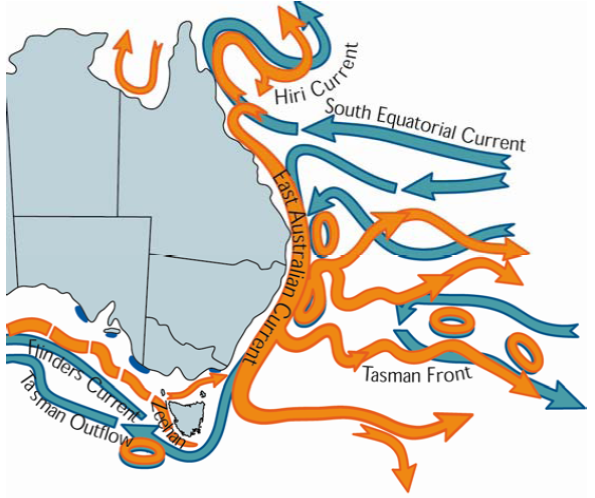 On the southerly movement of climate systems:

“I would like to at least alert you to a real world problem, as it affects southern Australia, which for decades I have seen coming from global warming. In short it is that the mid-latitude westerlies are moving further South with global warming, and thus the prevailing westerly winds across Bass Strait are weakening and there are more frequent easterly winds there, and waves from the east also. This will have (and I think is already having) an effect on coastal erosion, quite apart from any sea-level rise. My local verification is from casual observations from some 40 years involvement in a shared holiday house at Lake Bunga, just east of Lakes Entrance and just west of the Red Bluff at the eastern end of the 90-mile beach. Over the years we have seen significant changes…”

On the dredging of the entrance:

“Early in the 21st. century the sand dredged from the entrance was disposed of by pumping it via a pipe to an outlet just offshore east of the entrance.  However, this sand piled up on the eastern side of the entrance barrier, extended the beach out past the barrier, and it started to occasionally block the entrance. This concerned me…My thoughts are that the current crisis is due to three things all climate change related:

On coastal erosion and possible subsidence:

“I presume that in 2018 dredged sand from the entrance is now dumped far out to sea as it used to be, and that the entrance channel is now deeper. This may have increased the tidal flows through the entrance, but could reduce the risk from floods due to high river flows, until the sea rises further. However, I have more recently noticed some coastal erosion east of Lakes Entrance, for example some coastal dunes have eroded and old coastal tea-trees have fallen onto the beach, at places like the Lakes Entrance Golf course, and west of the entrance to Lake Tyers. There is no doubt in my mind that there is now a more westerly drift through Bass Strait due to a strengthening of the East Australian Current and more easterly winds as the planet warms.”

“There has also been rapid erosion of cliffs east of Red Bluff, which is a couple of km east of Lake Bunga, at the eastern end of the 90-mile beach. This may also be a sign of the more westerly currents and wave patterns in Bass Strait… Whether this will lead to the possibility of the sea breaking through the narrow sand dunes into the Gippsland Lakes at places other than the artificial entrance remains to be seen. (Similar effects could occur at the entrance to Port Phillip Heads and at Barwon Heads for example.)

An earlier concern of mine, prompted by my involvement at Bunga Haven, was with proposals for extraction of oil and gas from under coastal Bass Strait or the low-lying areas of southern Gippsland. This concern was about possible consolidation of sediments and subsidence, which could lead to flooding in some places.”

*compiled from recent correspondence. Barrie is a retired CSIRO scientist and author of the text Climate Change published by the CSIRO in 2009.