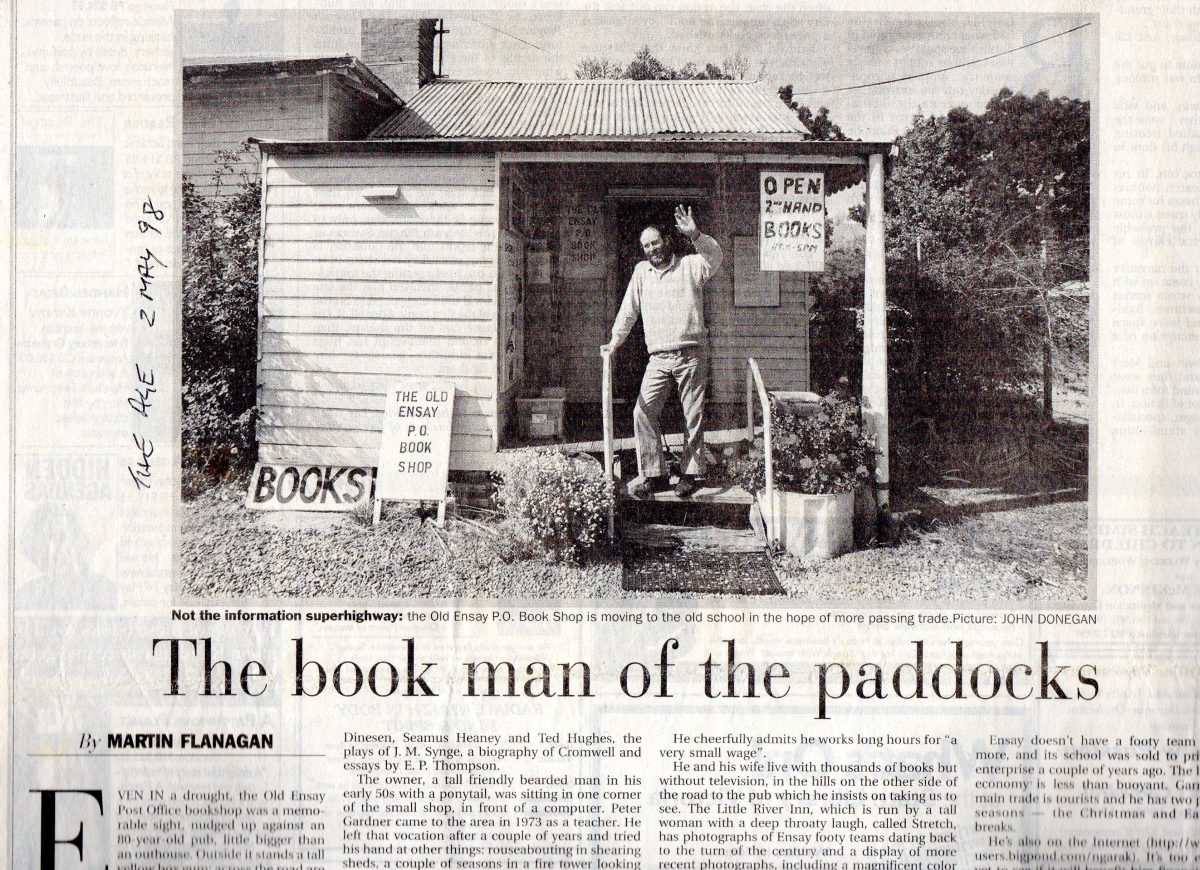 Interview (May 18) with Cam Walker of the Mountain Journal

I have lived in East Gippsland for over 40 years and between 1982 and 2012 in an owner built mud brick house which was powered by wind and solar energy. For 20 years I worked as a bookseller although I worked previously as a labourer, prospector and teacher in the Ensay and Swifts Creek districts. I am now retired to Bairnsdale.

Whilst  working as a bookseller I ran small retail outlets in Swifts Creek and Ensay as well as selling by mail order and on the net. Between 2007 and 2014 I planted trees on two small blocks of previously cleared land in Ensay to offset the carbon produced by my small business and my family. Although the retail business was sold in 2010 the planting has continued on a grander scale with over 800 trees planted in 2012 – by myself and the local landcare group – and further 8 acres has been seeded with local species by Greening Australia.

Over the years I have been involved in various organizations such as the Councils of both Swifts Creek High and Ensay Primary schools. I have also served on the Ensay Football Club and Social Club Committees, was Captain Coach of the team twice during the 70s and 80s, the Ensay CFA, the Swifts Creek/Ensay Landcare Group and was treasurer of the Tambo Film Society for many years. Currently I am a member of the Friends of the Library, U3A, East Gippsland Historical Society, the Bairnsdale Urban Landcare Group, the East Gippsland Family History Group, the Gippsland Environment Group, the Alternative Technology Association, the Australian Conservation Foundation and the Australian Society for the Study of Labour History.

I have been researching and writing on local and regional history since 1973.  My books  and essays are on Aboriginal history, the history of the Victorian Coal Miners Association and place names of Gippsland and the Victorian high country. More recently I have been writing essays on the land boom in Melbourne and its connections with coal capital in South Gippsland.

I am now writing short essays on climate change and renewable energy in Gippsland .

Urgent action is required at all levels of government to adopt a wide range of policies that mitigate global warming by reducing our waste and output of greenhouse gases and that adapt to the consequences of the warming we are experiencing now and further warming predicted in the future.