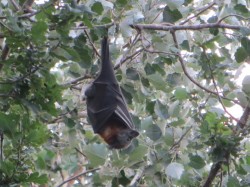 The Flying Fox colony on the banks of the Mitchell River is back in the news again with the East Gippsland Shire recently announcing that they would go ahead with removing 10% of the trees the colony inhabits without waiting for the colony to disperse. Plans to remove the trees last year were upset when the colony remained through the winter.

The gradual warming of the climate – especially in winter and at night time – increases the likelihood of the colony remaining there permanently. The winter stay of 2014 appears to be the first time that this has occurred. To date the colony is approaching two years of continuous occupation.

In a letter to the Bairnsdale Advertiser (8.5) veteran forest campaigner Jill Redwood voiced her concern at the tree removal program and dispersal attempts asking where “the bats will move to when their trees start to be cut down along the river…Will they move to the trees at the hospital next?” She noted that it’s a “shame that the benefits of flying foxes are not appreciated as forest pollinators and regenerators. They are also an easily accessible display of a most remarkable Australian species.” Redwood positively suggests the answer is to promote them as a tourist attraction.

The continuous presence of the bats may be merely an indicator of a warming Gippsland and that this warming has both extended the bats range south and their ability to winter over here. Perhaps their winter presence is a warning (and not just a mild irritant) that most of the other consequences of a warming planet are much worse.