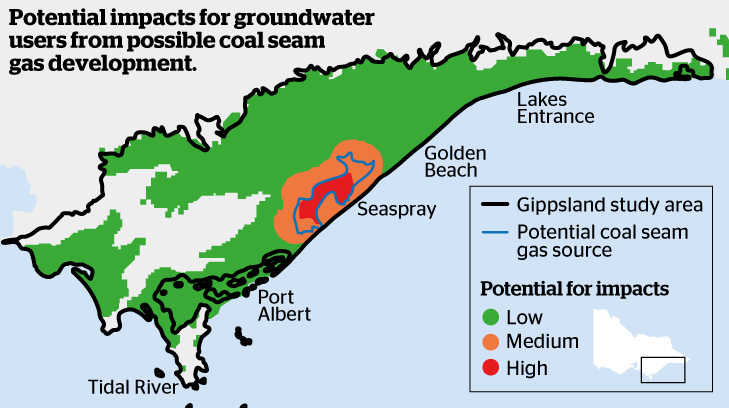 A recent article by Tom Arup entitled ‘Gippsland Water Table Could be Hit Hard by Coal Seam Gas’ (The Age 6.8) outlined a potential drop in aquifers in the Gippsland basin of 15m. (see map) These predictions form the basis of a government report to the current Coal Seam Gas Inquiry.

This report listed that the aquifers may drop from 2-15m as a result of various CSG and other unconventional gas activities. The report outlines the threat of subsidence of land in the highly vulnerable Gippsland basin but considers it low i.e. up to 2m drop. This the report argues is within ‘historical parameters’ and is therefore an acceptable risk.

However even a 2m drop in the aquifers ignores other continuing uses of the ground water and that the drain on the aquifers may be cumulative. Parts of the Latrobe Valley have subsided by as much as 2m and subsidence of even a fraction of this on the Gippsland coast as a result of CSG activities may be severe.

The other aspect of CSG that is getting little publicity is that it is a direct contributor to climate change and fugitive emissions of methane from pipes and wells probably means that it is as damaging as coal if not worse. That it is being considered at all is an indictment of our political processes.

Each year the sea-level is rising about 3.5mm pa in Gippsland. Worst case climate  scenarios of business as usual have this rise doubling in as little as ten years. That combined with even a small amount of subsidence will be truly catastrophic. I examined these factors in a paper some years ago which is still valid today. See https://petergardner.info/publications/gippsland-coast-2100-4th-ed-pdf/