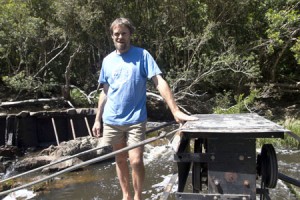 We have, somewhat ‘tongue in cheek’ labelled John Hermans of Clifton Creek, ‘Mr Sustainability’ of Gippsland. John is a man of many parts but he will probably be embarrassed by our label. Above all he is practical having built and lived in his sustainable house for many years. As well as teaching by example John is a great publicist for many of the basic tenets of sustainability.  He is a long term member of the Alternative Technology Association (ATA) and has been a frequent contributor of articles to their publications Soft Technology and Renew.  He has also been the President of the Gippsland Environment Group (link on side bar) for many years and has participated in the ATA’s solar installation project in East Timor.

His owner built home – incorporating a substantial workshop – is a showpiece. It is constructed of earth walls and an earth roof and John has used mostly onsite and second hand materials in its construction. Integral to this was his own small timber mill in which he was able to mill timber for the house from trees that had to be removed from the house site.

John is perhaps best known for his hydro-electric plant on the nearby Nicholson River which has generated renewable energy to the family home for many years. But he also has a large, netted, fruit and veggie garden in front of the house, and has been running his vehicle on biodiesel for many years. The oil is collected from fish and chip shops and processed on site. The vehicle uses either biodiesel (manufactured on site) or straight veggie oil. John is also a great fan of recycling and is often repairing electrical goods, cast off with simple malfunctions like a faulty switch. Recently he has been experimenting with biochar production. Is there anyone in greater Gippsland who can match this record?

A wonderful article, interview and photos was done with John seven years ago by the ABC’s Cath McAloon. It is still relevant, available online and well worth a visit. http://www.abc.net.au/local/photos/2008/05/08/2239377.htm