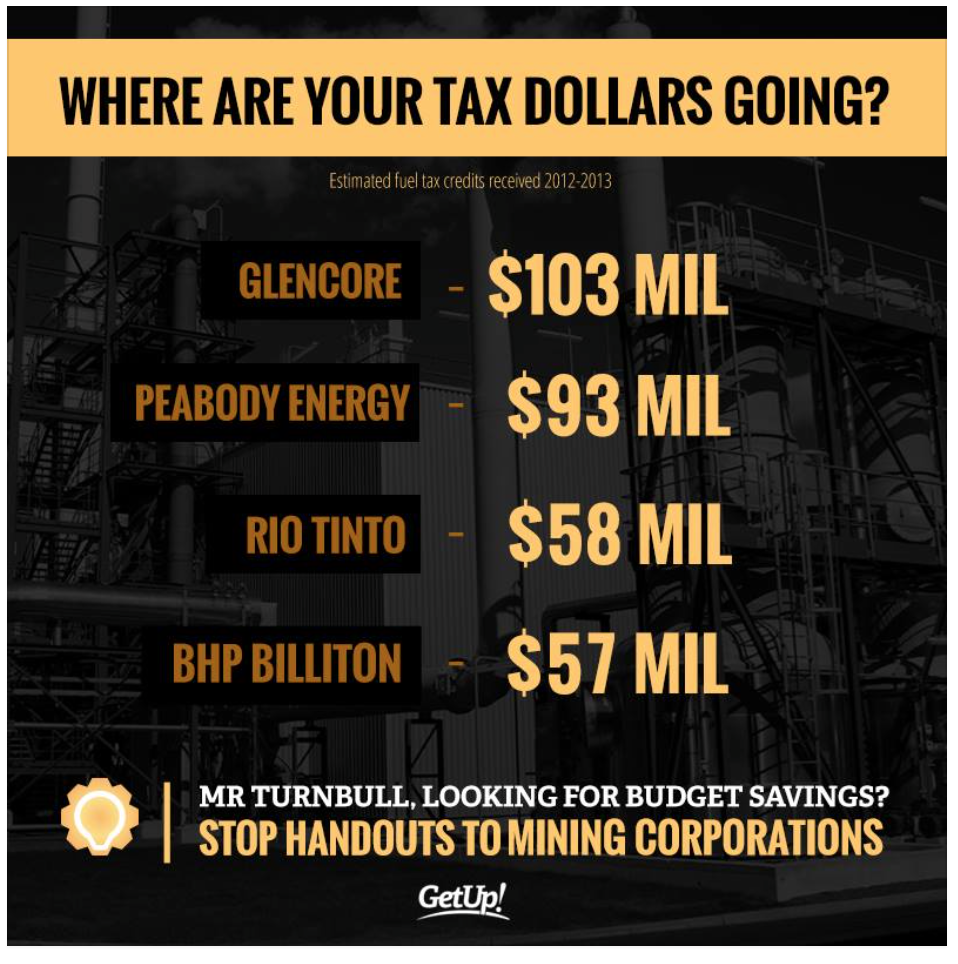 Recently Australia’s big news has been the number of large companies not paying any, or minimal, tax. There are so many ways of manipulating the books that paying tax for many of them has become optional. Many of these companies are of particular interest in the climate crisis – coal and petroleum companies and other large fossil fuel consumers generating copious greenhouse gas emissions. The list of the top ten earning multiple billions and not paying any tax is illuminating. They include 2 airlines, Exxon (who, for their actions in creating doubt and funding the ‘climate denialist’ movement deserve to be named and shamed as a climate criminal), 4 coal companies (GHP, Citic Resources, Mitsubishi Resources and Glencore) and only 2 that are not obviously tied to fossil fuel industry.

This revelation is all the more inflammatory when the generous subsidies to the fossil fuel industry are included, not to mention donations by some of these companies to political parties. There can be little doubt that money buys access to politicians and is the main influence on policies and legislation. For instance Mr Adani, the Carmichael Coal promoter and owner of Abbott Point, recently had access to the new PM Malcolm Turnbull over some undisclosed matter.

An article in the Sydney Morning Herald noted further tax offenders, including Mr Adani: “Chevron, which recently lost against the ATO in the Federal Court, but will be challenging the decision, had turnover of $3 billion but paid no tax. Adani’s Abbot Point Terminal in Queensland – with a turnover of $268 million – also paid no tax… News Australia, which had a turnover of $3.9 billion between its Australian arms, had $97.2 million in net income last year and paid $4.2 million in tax.” Thus we have Coal Promoters (Adani et al) and the Climate Criminals (Exxon, Murdoch) directing government policy though their financial contribution towards it has been negligible.

There are a large number of ways that governments can stop this haemorrhaging of their budgets including a turnover tax (say on businesses earning more than $100 million that pay no tax) or a Tobin tax, both of which are obvious and frequently mentioned examples. A coal export tax (starting at say $1 per ton and increased annually) could be followed up by a coal excise tax – a backdoor reintroduction of the carbon tax. Pollies speak about ‘balanced budgets’ and an ‘expenditure problem’ when they really have a ‘revenue problem’ but more than anything else they have global warming problem – of gigantic proportions.