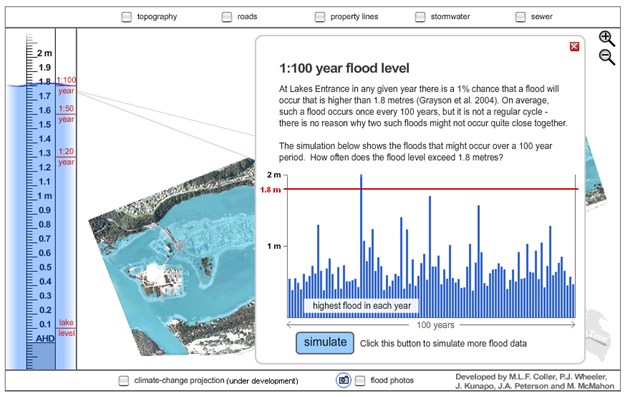 About 3 years ago when writing on the possible effects of climate change on the Gippsland Coast  I mentioned the interactive model developed by Dr Peter Wheeler on flooding inundation at Lakes Entrance. I then incorrectly criticised the Wheeler model by combining it with Bruun’s Rule. This rule basically states that coastlines will retreat about 100 times the amount of vertical sea level rise. The conclusion was that with some of the flood levels in the Wheeler model the foreshore at Lakes would no longer exist. However the model was looking at flooding only and in no way could it encompass the complexities introduced by Bruun’s Rule. This error was pointed out to me by Peter Wheeler and corrected in a subsequent edition.

Though controversial, Bruun’s Rule remains applicable to the Gippsland coast and to the Entrance. And the Wheeler model is applicable to flooding, whether from heavy rainfall or rising sea levels. But as has been pointed out a number of times rising sea levels are not even across the globe but merely an average. The oceans ‘slosh about’ as a result of various factors including tides, currents and storms. They rise because of thermal expansion and ice melt. It also remains that there will inevitably be a number of other influences on local events as a result of climate change including heavy rainfall, coastal erosion, storm surges, wave heights and storm frequencies on top of natural ones such as king tides.

More recently (2013?) Dr Karl Kruszelnicki speaking at a Lakes Symposium made a joke about Lakes being the first town in Australia to go under and that this could be made a tourist event. The humour of his ‘tongue in cheek’ comment was lost on most of the local media including the Bairnsdale Advertiser. Likewise the Lakes community’s response to the Wheeler model has also been disappointing. Locals tend to look at the global average sea level rise of about 3.5mm pa as a gradual phenomenon and in isolation from all these other events and influences. Somewhat simplistically they conclude that they can easily cope with this and rationalise that even if true it is an event far in the future and does not concern them.

Recent sea level rise predictions of as much as 3 metres as early as 2050 would see Lakes Entrance swamped, the Ninety Mile and the foreshore dunes pulverised and the Gippsland Lakes irrevocably doomed.  This worst-case scenario, combined with some of the other aspects listed above, is a dire threat to a number of small towns and holiday villages along the Ninety Mile. Lakes Entrance remains the largest town and the most vulnerable. We ignore these warnings at our peril and almost certainly horrendous financial cost.  Applying the Wheeler model and Bruun’s Rule with even moderate sea level rise to Lakes Entrance would see the disappearance of the Lakes foreshore – possibly in one cataclysmic event.

(for a review of the Wheeler model see here)