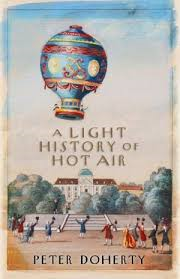 I picked up nice clean copy of Nobel laureate scientist Peter Doherty’s A Light History of Hot Air (MUP 2007) in an op shop recently. The book is part family history, some reminiscences, humour and general history but specifically it is about climate change. Much of what Doherty writes is valid today such as his sad predictions on coral reefs that are unfortunately now materialising:

“It will be an incalculable loss if ocean warming proceeds with such rapidity that it outstrips any capacity for adaptive evolution and results in the death of corals and the degradation of reef ecosystems…What an immense tragedy it will be if it comes to that. No amount of deliberate duplicity or rewriting of history, will protect the legacy of those leaders and generations that did not make the utmost effort to avoid such catastrophe.” (p.234)

Doherty had very high hopes for the “king maker” Rupert Murdoch and his prominence in the Western media via Fox and News Ltd. Unfortunately Murdoch’s “sea change” about treating climate change seriously came to nothing and his Australian papers still trumpet the climate sceptic message. But the “actions of presidents and prime ministers [and we assume media moguls] are best left to the measured judgement of history. Their policies often come back to haunt them.” (p.249) Perhaps at some future date I will examine more of Doherty’s thoughts on politics and the media.

Peter Doherty concludes: “I am as much a layman as anyone else when it comes to global warming. The only thing that my research field of viral immunity has in common with this area is complexity, and the associated possibility that outcomes may vary in unpredictable and even catastrophic ways. Time and time again over a long research career I’ve been jarred out of my complacency by the joint operation of the ‘law of unintended consequences’ and Murphy’s law (anything that can go wrong, will go wrong). That’s OK when we’re talking about laboratory mice, but not so good when the big ‘experiment’ involves all the life forms on this planet.” (p.263)

Even if a trifle dated at times, a bit too optimistic as with Rupert Murdoch, and sometimes a bit rambling, Doherty’s book is still well worth a read. Try your library. It is a book by a scientist about life and science.