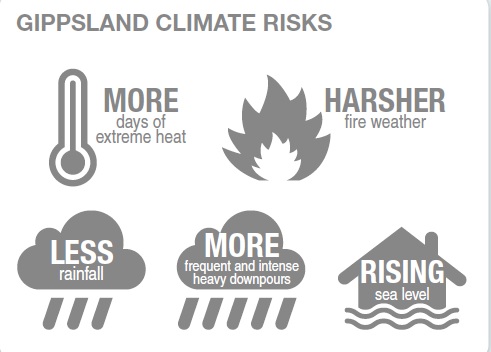 The gist of a conversation on global warming by local farmers at a party was recently relayed to me by a friend. Those concerned (all people I know and one or two I may have taught) stated that it was ‘good thing’ as they were having the best run of seasons they have had for a very long time. Some of it – perhaps a lot – may have been ‘tongue in cheek’ or the usual party banter. However there can be no doubt that, combined with good stock prices, the rainfall for much of east Gippsland and in this case the  Tambo Valley has been at least average and sometimes very much above average for the last five years, giving their statements an element of truth. Especially as an expected dry spell in an El Nino year did not materialise.

The problem with all this is that they are confusing weather and climate. If we examine the climate beyond the last five years we find that it is the dry spells, with the occasional severe drought, that was common. The El Nino year of 1983, when the Tambo was bone dry for miles, was perhaps more representative of our climate, which helps make last year such an exception. Or 1998 when in April following dust storms, small sand dunes formed in the lee of the Ensay hills to be followed by the June floods. Much of the first decade of this century was dry with our two big, one in 100 year, bushfires.

The variability of rainfall, where and when it is going to fall, is the most difficult of all things to predict. We all have probably experienced a summer thunderstorm where a few miles down the road from a downpour the country is dry. With each degree of warming around the world there is 7% increase in moisture in atmosphere, which means a corresponding increase of the same amount in global rainfall. Where it is going to fall is the problem. Science predicts that this rainfall will probably come in less days of rain but with heavier events.

Another aspect of this is the pervasive influence of the Murdoch media and in particular some of their populist commentators who appear to know more about climate than those who have made lifetime studies of various aspects of it. Also as many farmers are rusted on to the Nationals (the old country party) for their political representation so too are they rusted on to News Corp as a source of information. In this their trust is misguided.

It is easy to ‘muddy the waters’ of one of the most complicated, if not the most complicated, subjects on earth. This is a job News Corp does thoroughly despite the fact that every day half a dozen peer reviewed papers are published in scientific journals somewhere around the world verifying some aspect of climate change. For the man in the street the answer should be simple – earth’s temperature is dependent on greenhouse gases, increase them and the temperature rises and vice versa. We have been increasing the main greenhouse gas – carbon dioxide – since the start of the industrial revolution. Therefore the earth is getting warmer (and measurably so) whatever the President of the USA, one or two obscure Nobel Prize winners, News Corp and a few renegade and/or mercenary scientists say.

The reality is that Global Warming has been happening very gradually all our lives whilst the normal fluctuations of weather and seasons continue. Prof Will Steffen of the Climate Council stated that for the “last 40 years earth’s temperature has never been equal to or below the twentieth century average.” Such a figure is statistically impossible without human caused warming.