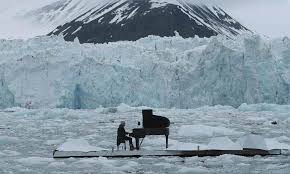 (Reproduced from the keynote address to the 2013 annual conference of the Australian Association of Arts Administrators.)

Thank-you everyone for allowing me to address this gathering, especially the traditional Aboriginal owners who for obvious reasons aren’t here tonight.  I was unable to find the Aboriginal for ‘Shanti’ but you know what I mean.

Whatever their medium, like a canary in a coal mine, the sensitive artist responds early to the sicknesses of their society.  It is their responsibility and privilege to alert others.  In their creations they may point to causes, suggest cures or at least provide relief and an opportunity for reflection.  This is particularly in cases where the health of the heart and soul are concerned.   I want to talk to you about a responsibility looming in our near future but also the privilege that I think our future holds for artists.

Global warming will bring terrible loss and sadness to many people.  At our current point eight degree increase life is getting rough and we’re having lots of disasters.  The best projections are that below two degrees we have an 80% chance of avoiding generalised disaster but with further temperature rise we can confidently expect extreme weather and the consequent disasters in steadily increasing frequency and severity.  Beyond two degrees the question of public art is not worth considering because life and certainly civilisation as we know it, will be steadily crashing about our ears.  According to such anti-development hippies as the World Bank, at either the current or treaty rate of emissions we’ll reach a two degree increase somewhere between 2045 and 2050.

If I may digress for a moment to address the climate change deniers:  If you think that’s normal I must assume you’ve witnessed other mass extinctions and other civilisations collapse.  You must have the perspective of a virtual immortal and you are probably also capable of inter-planetary travel.  As a practitioner of meditation I respect and admire you for that although as a human being I fear you.

We can’t give up fossil fuels in any degree because we don’t want to so we can’t.  If we did want to we still can’t because we have no control over our political systems, less still over the corporations that own and control them.  So that’s that.  We need to deal with the situation.  Pacific Islanders are just going to have to move.  The Australian bush will just have to burn and North Queensland will just have to be flooded away.  The east Coast of the US will have to get destroyed by storms, which is such a worn out movie cliché anyway.   Glaciers are alright in their way but who’s really going to miss them?  The third world was never financially viable; it will be a mercy killing. So we live in dramatic, spectacular, significant times.   These are among the best ingredients for great art…

The full piece by Scott Campbell-Smith can be read on Independent Australia here.