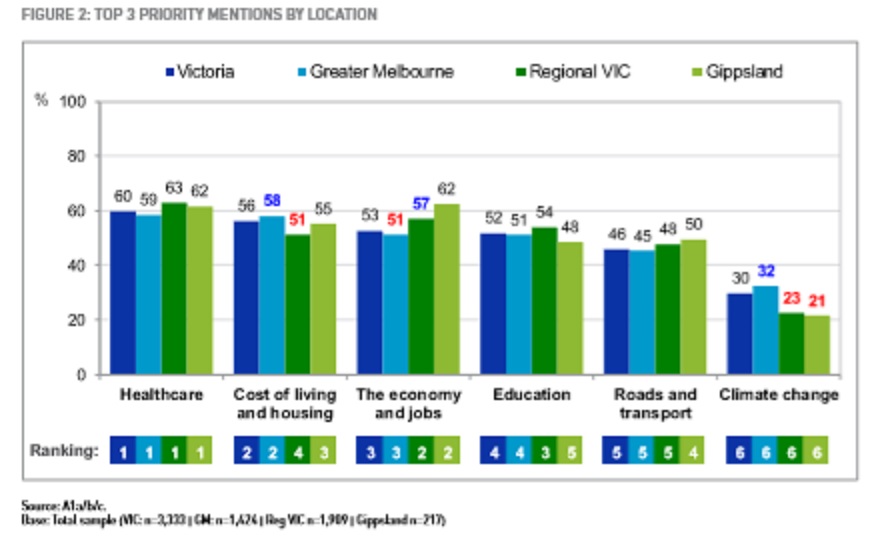 The current opinions and priorities of Gippslanders are clearly shown by the Sustainability Victoria commissioned opinion poll on climate change in our region. The priorities from the top are public health 62%; jobs 62%; cost of living 55%; roads & transp. 50%; education 48% with climate change a lowly 21% languishing at the bottom!

A Sustainability Victoria employee described the survey as “the social research is far beyond an opinion poll.  It is robust enough for results to be utilised in scientific literature. It is independent delivered with a sample size significant enough for the results to represent the wider population, and representative of all demographics (gender, age, education level, income, etc.).” We conclude that the poll is reliable and that few Gippslanders realise all these aspects of our lives are affected in some way by human caused climate change.

Some of these aspects already threaten our way of lives or, in other words, are a public health matter. Extreme weather effects our health, whether it is the heat stress of heatwaves or the physical threat of bushfires and floods to our lives and property. Farmers during periods of extended dry face mental stress as do other workers whose jobs are put at risk by the clean energy disruption. These are but a few examples of climate change’s direct or indirect effects on public health problems.

On the up side there are numerous reasons why we should rapidly change from dirty to clean energy. The Morwell open cut fire for instance was responsible for more fatalities than those caused by all the terrorist acts in Australia in over a century. The major industries, and thus employers, in the Gippsland region – logging and fossil fuel – are all operating on borrowed time. Others aspects such as jobs are being eroded by the disrupting solutions to climate change. Renewable Energy is a job boom area but jobs appear to be leaving the Latrobe Valley for elsewhere.

With regards the other high polling priorities in the survey the cost of living is affected in many ways. A few examples include insurance going up to cope with the damage costs of extreme weather events and the creeping costs to us all of the privatised (and heat stressed) power industry. With roads and transport climate change means fossil fuel transport must be phased out and replaced by improved public transport, electric vehicles and eventually autonomous or self-driving cars. And it is the apparent lack (or inadequacy) of science and logic in our education system that means the connection between climate change and all aspects of our lives is not made.

The alternatives to acting on climate change are stark. Supporting or voting for the reaction perhaps may defer the inevitable – the end of coal fired generation and the logging industry – for a year or two. But in doing so, many of the opportunities that accompany the disruptive change will be lost. I hope to examine these aspects of public opinion in Gippsland in more detail at a later date.