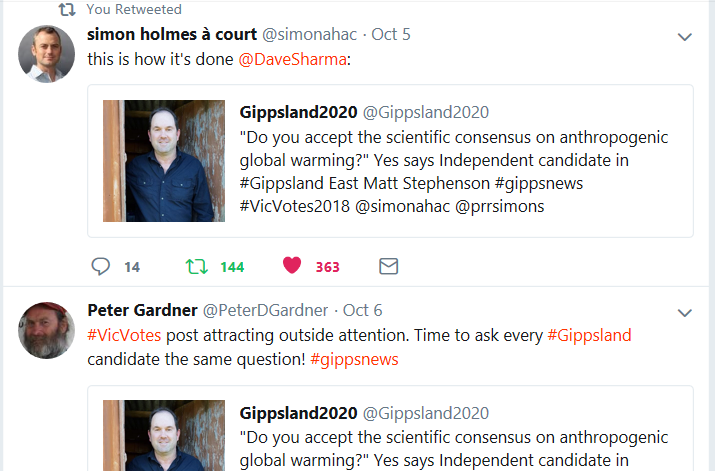 Melbourne University energy hub senior adviser Simon Holmes à Court has been asking politicians and would be politicians a simple question on climate change. Some time ago he asked Liberal candidate in the Mayo by-election Georgina Downer “can you please let us know whether you accept the scientific consensus on anthropogenic global warming?” More recently he has asked the same question of the Liberal candidate in the Wentworth by-election David Sharma, with, so far, no response. Simon has then publicised the response or non-response to his followers on twitter.

The question obviously has two parts – accepting the scientific consensus and that the warming is human caused. A spokesman for local member Tim Bull replied to my email but his answer was vague and ambiguous. Our local member accepts climate change but ignores the scientific consensus and claims incorrectly that the jury is still out on whether the warming is caused by humans.

The three candidates who have so far responded positively to the question are the Greens Deb Foskey and Independents George Neophytou  and Matt Stephenson. Their replies have been publicised on facebook and twitter through Gippsland2020. Amazingly the tweet on the latter’s reply was retweeted by Simon and received about 200 impressions (see above) – not quite viral but a big response in local terms. Stephenson is a twitter novice and unfortunately has not been able to take advantage of this.

It has been drawn to my notice that the Baw Baw Sustainability Group will be having a candidate’s forum in the seat of Narracan and there well may be forums in other electorates – quite possibly Morwell. Such events are ideal for the question to be posed by a single questioner and asked of all candidates present requesting that they respond with a single word – yes or no. And if no forums are held the same question can be directed at candidates through their contact details listed by the Victorian Electoral Commission.