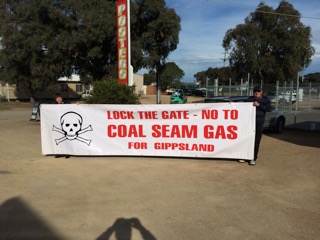 Paynesville resident Debbie Carruthers has been appointed master of ceremonies for the rally against onshore unconventional gas mining to be held in Melbourne on Sunday 20th September. The rally has been called “Farmers & Friends Against Fracking Melbourne Declaration!” and is meeting at 12 noon outside the State Library in Swanston St before the crowd marches to the steps of Parliament House. Organisers have stated that “We are taking our message to the city again, we need 1000’s of people to send a clear message to the state government that onshore gasfields are not welcome here!”

Debbie is the hard working volunteer co-ordinator of Gasfield Free Bairnsdale. As well as helping to organise a large public meeting in Paynesville nearly 2 years ago, Debbie has assisted Goon Nure, Meerlieu, Perry Bridge and Bengworden with their gasfield free declaration held at Meerlieu last October and more recently has run the Nicholson, Broadlands, East Bairnsdale, Newlands Arm and Eagle Point gasfield free declaration held at Eagle Point in April.  Before declaring those districts gasfield free, landholders were asked if they wanted gasfields on their land (in response to finding out that there was an exploration mining licence on their land) and 98% said no.

Debbie is also calling for the East Gippsland Shire to join an ever growing number of local councils in opposing onshore gas mining. On social media she recently said: “If other Councils are able to take a position on CSG why can’t East Gippsland Shire? Not taking a position leads the community to believe that the Council supports it. Even though there is a moratorium in Victoria many Councils have taken a stand to say they don’t support onshore gas mining. The Council should look at information from the Australia Institute to see the data about the costs of unconventional gas mining.”

Members and supporters of Gasfield Free Bairnsdale and Frack Free East Gippsland and Gippsland2020 will be attending the rally.

Debbie can be contacted on 0448 809 798 or gasfieldfreebairnsdale@gmail.com or fb: ‘Gasfield Free Bairnsdale’