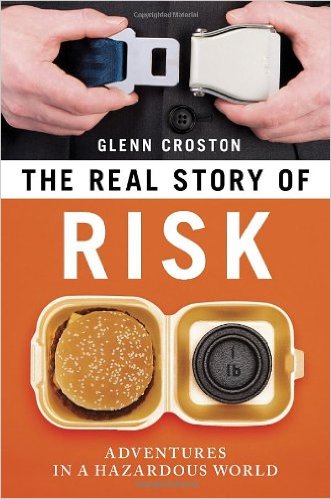 Glen Croston in his book The Real Story of Risk argues that evolution has programmed man to respond to immediate risks and ignore long term ones. He wrote that evolution: “does a good job at giving us good responses to immediate threats, but it does a much poorer job at providing effective responses to risks that develop slowly, are far away, or are spread out over a large area. The evolutionary impact of immediate threats is greatest because of the direct link between responding and surviving.”

Croston makes the point that some of these learned responses are obsolete such as our fear of snakes or sharks. He speculates that we may need to experience the effects of climate change before we are forced to act. Whilst such an experience may be the ‘best teacher’ it is also most likely that by the time enough people experience these changes to act decisively it will probably be too late. Fatalism and inaction may also be a response to this situation.

He continues: “There was probably a time in human prehistory when taking a short-term perspective on life made sense. Life was short, and the threats against it were constant and immediate… The times have changed though, while we haven’t. We’re still on the lookout for immediate risks acting directly on us, and we’re blind to long-term risks, like climate change with far greater long term costs.” (p.59)

Parts of the ‘learning experience’ Croston talks about are with us now – the increasingly severe and more frequent extreme weather events. It is now a matter of identifying how much of this flood or that drought or this bushfire was caused/influenced by climate change. And if our responses have little or no effect then eventually we will be forced into some form of emergency war-time style government – even, horror of horrors, an international one. One can only hope that those then in power are more gifted that the incompetents (with some exceptions) we have managed to elect to parliament for the last few decades.