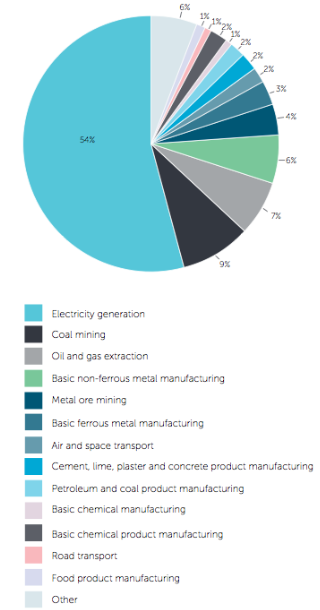 There has been a lot of ‘noise’ on the social media recently stating that the methane produced by beef cattle and other ruminants is the main cause of climate change and the answer to it is to stop eating beef. The source for this has been incorrectly attributed to the most recent study by the Intergovernmental Panel on Climate Change (IPCC) publication. It is true that methane is one of the main greenhouse gases, that in its early stages it is a far more powerful greenhouse gas than carbon dioxide, that it eventually degrades to CO2 in the atmosphere, and it is produced in the digestive systems of ruminants. However it is not by any measurement anywhere near the main source of greenhouse gas.

Tim Flannery in his recent publication Atmosphere of Hope noted that “three fossil fuels – coal, oil and gas – lie at the heart of the climate problem” and that the “burning of coal to generate electricity remains the world’s single largest source of carbon pollution.” The World Wildlife Fund noted that in 2008 72% of Australia’s greenhouse gases came from stationary and transport energy related uses compared with 15.9% from agriculture – mainly cattle and fertilisers. Of that part of energy use 51% came from the stationary generation of power – mainly Flannery’s coal fired power stations. One can assume that these figures are roughly the same today in Australia and similar throughout developed nations.

The stories appear to have originated from vegan organisations. It may be a sad example of an otherwise legitimate cause pushing its own barrow and promoting that cause to the detriment of the whole. As the above information on methane indicates much of what they are saying about greenhouse gases and climate is true but the final extrapolation from IPCC information is not. Unfortunately this is a tactic similar to that used by climate change deniers. The end result is often general confusion and the diversion of energy away from the obvious target – closing down the use of coal as a source of energy.

We should try to reduce all aspects of human greenhouse gas sources by as many different means as possible – this is the “silver shotgun” approach advocated by Washington & Cook in their Climate Change Denial (2011). Some things are far easier for individuals to adopt – the lifestyle choices – and we should all do everything we can to try to avert the ‘climate emergency’. But it is essential that we keep our eye on the main game – coal and coal generated electricity – and are not diverted from it.